I'm having a love/hate relationship with my stitching efforts on the Rishfeld canvas.  There are moments when I look at the yellow flowers and think "Cool.  A little bit of dimension. With a lovely crystal in the center, these babies will really pop!" 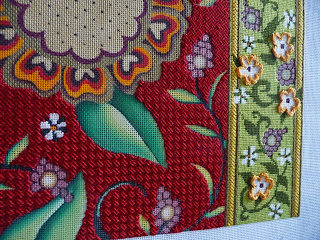 Other times I wonder what in the h-e-double-toothpicks I was thinking. 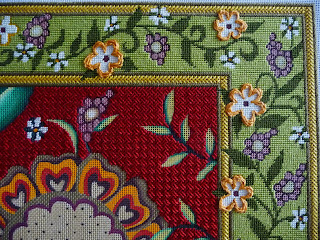 So I've decided to finish those last two in the upper left and then move on to another mo-teef.  Then, when the whole kit and caboodle has been completed, I can decide if the yellow flower "let's just do a few random stem stitches" idea will stay or go. 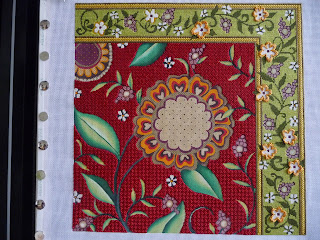 How's things in YOUR neck of the woods?
Posted by Coni 13 comments:

We're adding our thoughts and prayers to those of the rest of the world for you, Oklahoma (and elsewhere if you've been hit by Mother Nature).    I'm so sorry for it all...the loss of life, of home, of community...all of it.  I pray that you can find one small moment of peace or comfort in the coming days.


Small progress on the Rishfield canvas... 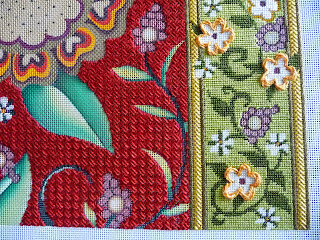 Damnit, I love this dog!

Happy Birthday, bubbala.  Mommie loves you.  Truly.  I do.
Posted by Coni 18 comments:

My Mo-ther can't come to the blog right now.  She's snoring away in the big girl sleigh bed while I am left to my own devices with this computer and a few pesky squirrels at the bird feeders for company.  I realize that it has been quite a long while since last we spoke, so I hope that this finds you hale and hearty, my dear friends.

Happy Mother's Day to one and all on behalf of spoiled little pups like myself.  (Did I really just say that?  Could it be that I'm turning a new leaf and am realizing that I really do have a pretty good gig here with the old lady and all of her crazy notions of what it takes to raise a "uniquely interesting individual" such as myself?  Have I come to appreciate the fact that, while completely clueless, my stupid Mo-ther always comes from a place of love, even if the end result is usually something that makes me want to tear my little white fluffy hairs out?  Am I learning to be loving and grateful for the happy home that she's bumbleclucked her way into creating?)

Here is some progress on the Rishfield canvas that Mo-ther started at the beginning of the year.  As you can see, she's completed stitching all of the white flowers, and has added a lovely elongated cross border in between the green and red sections and on the perimeter.  Methinks this will be quite lovely once completed, provided the old lady doesn't go totally off her nut and do something crazy like apply felt daisies to the damn thing. 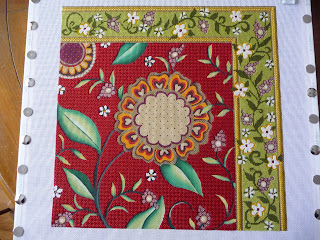 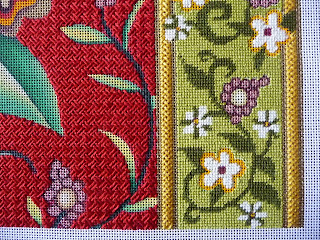 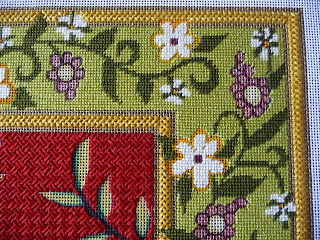 We're off to a quiet Sunday. My Aunt Chrissy and pesky cousin Bosco will arrive shortly for a marathon session of stitching, snacking, and Game of Throning.  We seem to have finally fallen into a pattern of "Sissy Sundays" that makes my mom's heart positively sing, so I suppose we had better keep doing it for the duration if we expect to keep any peace and quiet around here.

I hope that you know that until we meet again I remain your loyal and devoted friend.  To all of the mothers out there in Blogville, I wish you a most heartfelt Happy Mother's Day and all that comes with it.

With much love from your pal,
Stewey 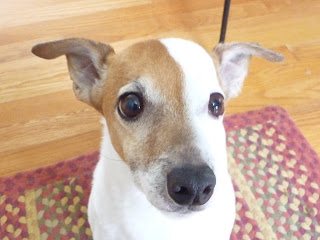 ******Sorry, kids.  I see that I probably should not have violated the whole thing about politics, sex, or religion.....I was just surprised that the Pope His Very Self was throwin' shade at spinsters.

(Don't you just love how I'm all hip with the lingo suddenly?  I KNEW watching all these Real Housewives would finally pay off!!!!)


VATICAN CITY (RNS) Pope Francis on Wednesday (May 8) told leaders of women’s orders from around the world to be “fertile” spiritual mothers in the Catholic Church, not “spinsters.”
ti 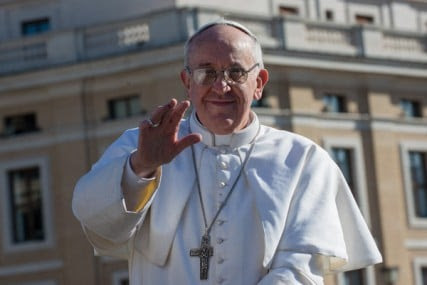 Pope Francis waves from the pope-mobile during his inauguration Mass at St. Peter’s Square on Tuesday (March 19) at the Vatican. World leaders flew in for Pope Francis’ inauguration Mass in St. Peter’s Square on Tuesday where Latin America’s first pontiff will receive the formal symbols of papal power. RNS photo by Andrea Sabbadini
The Argentine pontiff addressed some 800 leaders of female religious orders who are in Rome for the meeting of the International Union of Superiors General.
Speaking about the nuns’ vow of chastity, the pope stressed that it must be a “fertile” chastity, generating “spiritual children in the Church.”
With one of the more colorful off-the-cuff expressions that have become a hallmark of his young pontificate, Francis said that “the consecrated are mothers: they must be mothers and not ‘spinsters’!”
“Forgive me if I talk like this, but this maternity of consecrated life, this fruitfulness, is important!” he added.
Echoing a theme that has often resonated in his public speeches, the Jesuit pope also lashed out against “careerists” and “social climbers” who “use the Church … as a springboard for their interests and personal ambitions,” saying they do a “great damage” to the church.
The Vatican-mandated overhaul of the Leadership Conference of Women Religious, the largest umbrella organization for U.S. nuns, loomed large over the May 3-7 meeting of Catholic sisters, which is devoted to discussing the issues of authority within the Catholic Church.
On Sunday, Brazilian Cardinal Joao Braz de Aviz, who heads the Vatican office that oversees religious orders, told the meeting that he had been left in the dark about the Vatican investigation into LCWR. The Vatican’s top spokesman on Tuesday said it was “not justified” to infer that there was a “divergence” on how to deal with American nuns.
In his Wednesday speech, the pope reminded the nuns that it is “absurd” for religious women to think of carrying their vocation “outside of the church.”
“It isn’t possible that a consecrated woman or man might ‘feel’ themselves not to be with the church,” he said.
After the pope’s speech, a group of nuns was allowed to briefly greet the pope personally. Sister Florence Deacon, president of the LCWR, “was present at the audience but did not have the opportunity to greet the pope,” according to LCWR spokeswoman Annmarie Sanders.
Posted by Coni 17 comments: 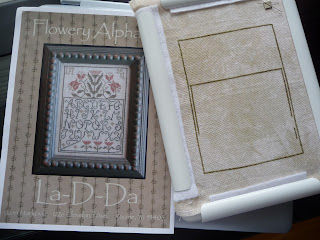 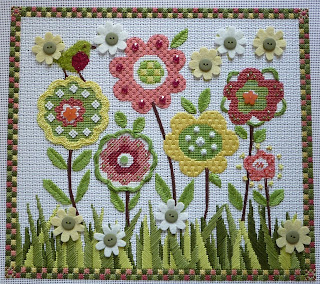 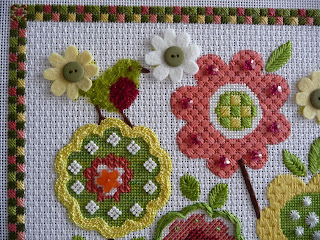 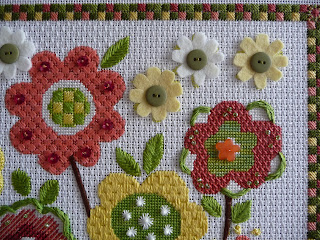 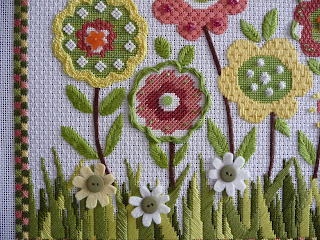 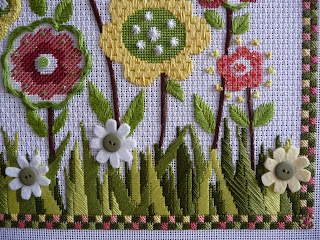 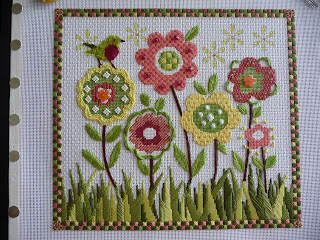 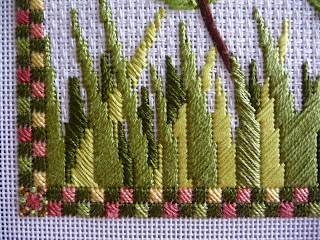 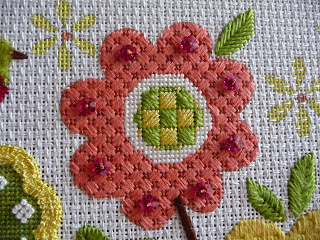 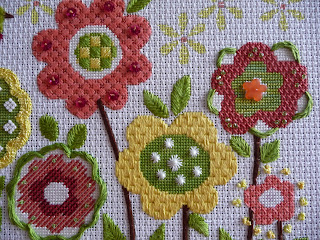 Now before you think I've gone completely 'round the bend and have neglected to actually finish this canvas before commencing with the Hap-py Dan-cing, I've decided that I'm going to use actual real live (OK, maybe not live, but silk) yellow daisies.  Remember the canvas that I did that with once before?  Well, if it was good once.....

Thanks for all of your lovely comments and encouragement during the stitching of this piece.  I must say that it was truly a joy from beginning to end and that I never could have done it without the design talents of the folks at Melissa Shirley, or the amazing charting/suggesting/tarting abilities of Miss Ruth Schmuff Her Very Self.  Who's better than they are?

Have a wonderful weekend, kids!  Stewey and I are off to the Happy Chair for a little cuddle time and movie watching tonight!  Woo Hoo!

Thank you for all of your lovely comments about the canvas I'm working on, but I really must give credit where credit is due, especially since I am completely incapable of devising a thread/color/stitch scheme that doesn't end up looking like the dog's breakfast.

Unless, of course, it's MY dog we're talking about --  in which case breakfast consists of tea and lightly buttered toast, all served apres' bath on a whimsical little bed tray with the Times and a tea rose for effect.

When I purchased this canvas, I asked Miss Ruth Schmuff Her Very Self from Bedecked and Beadazzled to kit/craft/tart the whole thing up as only Miss Ruth can do.  She selected all of the threads and stitches and told me when/where/how to do everything so that I could show it to y'all and feel like a freakin' rock star.

Lots of questions about the bird....she's stitched with a fiber called Fuzzy Stuff made by Rainbow Gallery.  Miss Ruth suggested that I turkey work her, but this is me we're talking about, so I just did a few long and short stitches and then fluffed the fiber with a little brush.

I'm still plugging away on the grass.  Who knew that it could take so long to grow?
Posted by Coni 3 comments: