PEACE, LOVE, AND JOY MY FRIENDS

The Spinster Stitcher, her little dog too, Aunt Chrissy, and Baby Bosco send you love and wishes for all that is merry and bright for you and yours!  Be safe, travel well, and enjoy your holiday.  We'll do the same and will see you in the new year!

BACK TO MY ROOTS

This is Laura J. Perin's "Victorian Ribbons" and I'm trading out the recommended Camouflage for Holiday to make it all Christmas-y. 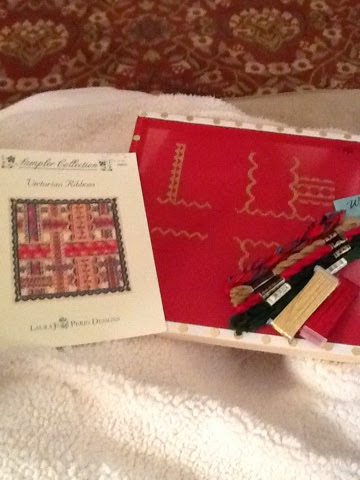 Here's the damage so far: 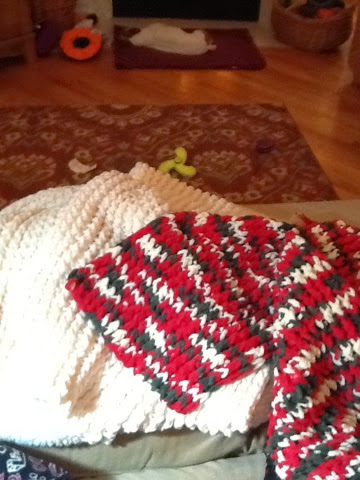 What looks like a big pile 'o yarn is actually a shawl (the white/cream thingie) and a Christmas scarf (the red, green, and white thingie).
I've been sporting both around the neighborhood, and must say that the folks at the baby blanket yarn company sure know what they're doing....this stuff is s.o.f.t. and very very warm.
Stewey is unimpressed and has vehemently demanded that I return to counted needlework forthwith, but for now I'm satisfied to play with my bargain a little longer.
(The long loom was about ten bucks and the yarn was no more than seven or eight...all thanks to some well-used JoAnn's coo-puns.)
The outside decorations were hung with care, thanks to the help and supervision of Aunt Chrissy and You Know Who, but that might be as far as we get this year.  Would it be so wrong to just stand in the driveway whenever I feel the need to look at twinkle lights?  I keep thinking about how easy it will be to put all of the decorations away if I never get them out in the first place.
So that's the story from Lake Woebespinster.  I hope that your corner of the world is exactly how you want it to be!
Posted by Coni 12 comments: