IS IT STILL CALLED A NAP IF IT'S SEVEN HOURS LONG?

I blame Stewey for this one.  Yesterday we got up at the crack of dawn to meet the A/C repairguy, and by the time he left I was already sleepy.  That was at 9:30am.  Then, after pushing myself out of the Happy Chair and into a few piddly chores, I spied Stewey standing in front of the bedroom door baby gate, looking pitiful and all "Hey, my dear sweet Mommie Dearest.  Let's go take a quick snoozy nap to refresh our little selves", so I caved like the big fat pudding that I am.

Seven hours later I heard the answering machine beep and Aunt Chrissy's voice cheerfully say "Hi, Aunt CJ!  Just wanted to let you know that I'm home from work all safe and sound.  Wanted to see how your day was and whether or not you enjoyed this pretty sunshine!"

I briefly contemplated fibbing to her and coming up with a big long list of everything that I accomplished, but I came clean instead and braced myself for a load of guilt and recrimination.

Instead, Aunt Chrissy said "Well, it sounds like you really needed a good sleep", and I remembered why I love my little sister so much after all.

If I were to put my mind (and needle) to it, I might be able to complete this one within the next few days.  Considering the move of Monday laundry to Tuesday, perhaps there's a chance we'll hear the pitter patter of tiny little 300-pound humming bird feet?  Stay tuned.
Posted by Coni 3 comments: 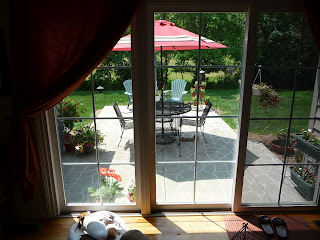 The party guests cool themselves in the shade while the host sleeps off an over-indulgence of an impertinent little Merlot.  Word has it that the Spinster has taken to the big girl sleigh bed with a book entitled "The Weird Sisters".  Not one ounce of laundry seems to be completed, nor does there appear to be any attempt to clean the puppy nose prints from the lower parts of the windows.  All is quiet, hot, humid, and lazy on a Midwest Monday afternoon.
Posted by Coni 12 comments:

If you're state-side, please have a safe and relaxing Memorial Day weekend.  If you're state-adjacent...ditto.  If you're state-non-adjacent-but-we-have-CNN-and-know-what-all-of-you-crazy-Americans-like-to-do-to-kick-off-your-summer-holidays, then please do enjoy yourselves also!

Today will be a marathon homekeeping session (sounds so much nicer than "I'm going to strap on the big girl bike shorts and scrub the bathroom, doesn't it), followed by some marathon stitching and "Magic City" watching.

Mummus and mocktails on the patio with Aunt Chrissy and Bosco on Sunday!

And finally...Monday will hereby be established as the 2012 Official Spinster Stitcher Day of Stitching in the Jammies While Sipping Iced Cold Lemonade!

Hello, one and all!  My mom can't come to the blog right now because she's wandering aimlessly about the house muttering to herself.  During the last lap around living room/dining room/kitchen I heard her say "Now I wonder where I put that power washer?".  I don't have the heart to tell the old lady that we don't actually own a power washer (*), so until she starts moving large pieces of furniture around to search underneath, I think I'll let her go.

We're off to a relatively good start to the season here at Chez Spinster.  Thanks to my Aunt Chrissy and her outside expertise, I'm happy to report that the back patio is sporting some lovely lovely blooms.  Mo-ther got a bee in her bonnet this year and decided that she wanted the pretty in the back of the house instead of the front so that she could actually enjoy it, and thus far it's proving to be a good decision.  Aside from a few pulled muscles and a lot of sweating and grunting and complaining (on Mo-ther's part), I would say that the planting went well.

The veggie garden is considerably downsized this year.  Since cucumbers proved too difficult for my crop-challeneged mo-ther to attempt, we went with three simple groupings of tomatoes...one roma, one cherry, and one beefsteak.  We'll see how long it'll be before we're all sporting bright red lips and mouth sores from all of the tomato sandwiches because nobody around here seems to have an ounce of self control when it comes to making wise food choices.

On the stitching front, Mo-ther continues her 300-pound hummingbird routine and flits from project to project until she collapses into a heap of frustration.  She seems to be in a canvaswork mood, but every now and then I catch her with some cross stitch in her hands because she claims her arms are tired from propping up the stretcher bars.  (I'm not sure why she makes this particular claim, especially since I would describe the body parts that prop up the stretcher bars more as "boobs" than "arms", but what do I know?)

Thank you for all of your lovely birthday wishes.  I turned 7 this year on May 13.  As you know, that was Mothers' Day, and it also happened to be the eighth anniversary of my grandfather's passing.  Both Mom and Aunt Chrissy seemed out of sorts all day, so I didn't make any fuss over the lack of cake or party hats.  Besides, whenever we try to have some kind of forced festivity around here, I'm usually the one ending up in time out for peeing on the ottoman.

So that's the report for today.  Same old, same old.  Life with Spinster will do that to a fellow, but every now and then it's nice to be sans drama.

Thanks for stopping by.  Until we meet again, I remain your devoted and loyal friend,
Stewey

(*) The Spinster Stitcher does not own a power washer because her little sister overheard her musing about the effects of said power washer as a weekly cleaning tool for various and sundry parts of the interior of the house.  Since the little sister has absolutely no intention of explaining to the nice repairmen how it is possible that one portly woman was capable of simultaneously stripping the finish off of hardwood floors while removing every molecule of paint from the walls and tile from the bath, she opted for a Swiffer wet mop instead. (The Spinster has yet to use it.) 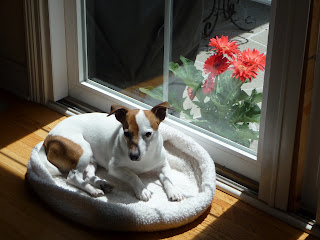 The Official 2012 Stewey Angus Willowswamp Summer Portrait
(with the official 2012 Summer Daisy, courtesy of Aunt Chrissy on the occasion of his 7th birthday)

(And yes, in case you were wondering, she purchases a daisy for him every year, and he spends the summer inspecting/enjoying it while lounging in the sunshine.) 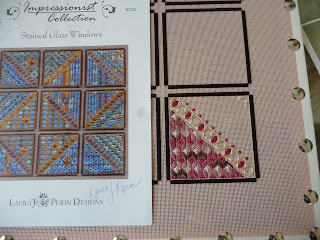 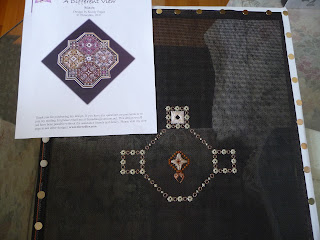 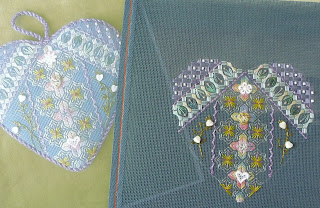 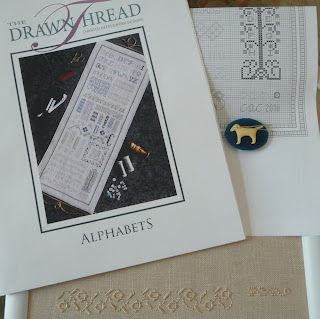 Alphabets
The Drawn Thread
(I had started this one previously on 32ct. linen, but decided that 28ct. would be much better for me.)
(I was right.)
Posted by Coni 19 comments:

Theories abound as to what the Spinster Stitcher and her little dog too could possibly be up to.  In the interest of not losing ALL of her faithful friends and readers, here's a little quiz:

1. The Spinster Stitcher hasn't been posting to this here blog because she a) entered the Federal Witness Protection Program and is being held in a super-secret location, b) won the lottery and finally bought a yacht, c) decided to get a jump on Spring cleaning, or d) is taking a nap.

2. Stewey finds this lack of daily posting/blathering a) refreshing, b) delightful, c) what he's always wanted, or d) all of the above.

I do love you all for your comments and emails and such.  Please don't fret or cry for me, Argentina.  All will be well and I will be back soon.  In the meantime, have a fabulous weekend and keep those needles flying!

Try not to have too much fun without me, kids.  (tee hee!)   I'm going to take a brief blogus interruptus, but promise to be back toot sweet!