Aunt Chrissy and Bosco have been hanging at Chez Spinster lately and there's a whole lotta' stitching going on!  I finished the green background of the Rishfeld canvas, and Aunt Chrissy made some good progress on Shepherd's Bush Baby Bug Ball.  (She's been a SB fan from Day One, so it's a pleasure to watch her get back into a stitchy groove!) 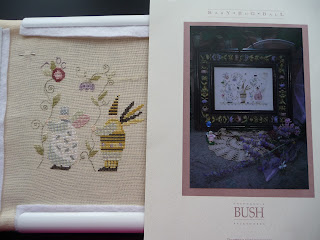 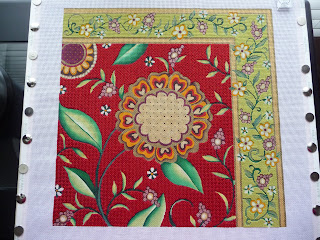 We're warm and safe and dry and hunkered down with some vegetable soup and homemade bread for dinner.  The weather report for these here parts is a bit dicey, but we're armed with lots of comfort for the duration!

Thank you one and all for all of your lovely notes and cards and letters and well wishes for Aunt Chrissy's speedy recovery.  She'll be on the mend soon and back to her old self as fast as I can possibly get her there.  In the meantime...love love love to one and all!
Posted by Coni 21 comments:

WELL, AT LEAST SHE HAS A PLAN

My mom can't come to the blog right now.  She's still snoring away in the big girl sleigh bed, with occasional mutterings of how she's never going to leave the house again.  Methinks she has finally gone 'round the bend, poor dear.

What a wonderful world we occupy to have such lovely friends both far and wide.  Your prayers and support and encouragement were everything my mo-ther and Aunt Chrissy needed these last few days, friends.  THANK YOU!!!!  Both Bosco and I want you to know that your concern for our mommie dearests is precious to us, and we will never forget it.

The plan for today is rest and then more rest, followed by an evening of lounging.  Tomorrow, we're going to wash some underpants and push the Swiffer around a bit, and then Sunday is going to be a studio day.  I can tell how much it's bothering Mo-ther that she hasn't stitched in a while, so I'm going to insist that she does so, if only for the good of the planet.  A stressed out spinster isn't god for any body or any thing, so we need to fix it.

As for me, I will enjoy the return to my perch, little bed, apartment, and ottoman.  You'll be happy to know that I have been on my very best behavior of late, so please don't fret that I'm watering the drapes.

Wherever you are is where I hope you wish to be.  Have a splendid weekend, give yourself a big hug from all of us here in Hoosierville, and know that we cherish you sincerely.

With love from your pal,
Stewey
Posted by Coni 13 comments:

1.  Thank you, dear friends.  Your love and support are just what the doctor ordered.  In the lobby of our hotel is a big dispenser of this special water that's supposed to make everything all better. (Well, maybe it's just regular old water with a bunch of stuff in it like fruits and herbs and such, but I've got it in my head that it has magical healing powers, and I make poor Aunt Chrissy take a sip every time we pass it.)  "You do realize that we're in Cleveland and not at Lourdes, right?" she says every time I hand her a cup.  Well, your comments are like that damn water, kids, so I'm drenching her in them every chance I get.

2.  A few moments ago I got a really good chuckle out of her.  We were watching the TeeVee and a commercial came on for Kourtney and Kim take Miami.  So I put on my very best pouty kissy face and said..."Kourtney and Kim take Miami?  How about Crys and Coni take Cleveland!?"  And then we started cutting up about what that might look like and how we'd finally have enough money to do all of the things we'd like to do, like send Stewey to charm school, get Bosco a motorbike, and finally open up that needlework shop.   Look out, Bravo , here we come!

3.  At one point last night I got so frustrated that I am of no help whatsoever that I said (right in the middle of a snotty ugly cry)...."Oh, sissy.  You would have been better of with a labradoodle."  Thank God my sister is my sister and she knows that no matter how bad the circumstances might be....I will find a way to turn it all around and make it all about MEEEEEEE, because she just smiled and patted my hand and made me feel much better.

We headed off to yet another procedure.  This one will involve anesthesia, so at least I know Aunt Chrissy will be able to get a minute of peace and quiet.

Thanks again for all of your love and support!  We're hoping to return to our regularly scheduled programming real soon!

I'm sitting here watching my little sister sleep after what has been a ridiculously bad day for her.  I promised her that I wouldn't tell the whole world all of her secrets, so I will, instead, tell you that my sister is the bravest person I know.

She hasn't been feeling very well for a very long time now, so part of trying to get her better is a series of tests that will tell the docs here in Cleveland how they can fix her.  Logically, we know that these guys are the best, and mentally, we know that this test is what is necessary, but it didn't do a damn thing to make it any easier to endure.

But my sister took a deep breath, wiped away her tears, and said "Let's get this over with" before I was able to figure out where to hang our coats.  She was brave.  Oh, my God, was she brave.  I stood behind her to lend what I hoped was feeble support, but instead all I could do was bawl that my little sister had to be so scared and in so much pain.

Tomorrow morning, bright and early, she'll have the monitor removed, and then we can prepare for the next test.  The only good thing with this one is that we already know that she will be knocked out for it.

Too bad I won't be, but I promise that I'll try to be a little brave.....and maybe worthy of a sister like our dear Aunt Chrissy....

Keep those happy thoughts, kids.  We'll see you on the other side!
Posted by Coni 46 comments:

THANK YOU! to one and all for the great recommendations!  I think that our stitchy friend Joanne will have several options now....all thanks to you!

I've been in a little bit of a blur these last few days, so when I awoke to the news that weather was bearing down on y'all over there on the coast I said  "Stewey!  We need to invite the entire state of New Jersey home to live with us again!".

Little Lord Fauntleroy was, as usual, not at all amused.

But for all of you in the storm's path....please stay warm and safe and dry.  Eat something wonderful, drink something comforting, and stitch to your heart's content!  We'll be sending you our happiest thoughts for a safe and happy weekend!

Hi, kids.  I'm in the midst of a project at the moment, so not much of an update for you, but a fellow stitchy friend needs help.

If you're a canvas work person, and enjoy doing those types of projects, where do you go for all of your supplies?  We're looking for a "one stop shop" type of place that will have stretcher bars (preferably Evertights), Caron threads, canvas, and other supplies that would help you complete a project.

I awoke with the happy thought that today was Futzingday (*).

"Woo Hoo!" I bellowed, as I hopped out of the big girl sleigh bed.  "A whole day of Futzing is to be had by all!".

This was right about the point that Stewey poked his nose out from under the t-shirt sheets and Woolrich blanket to inform me that today is, in fact, Tuesday, and NOT Futzingday.

So I'm going to head to an appointment and then come home and start the festivities early.  I'm jonesing for a studio day, and if I can manage to get the motivation to do more than stare at the walls, I might actually make it up there to rummage through my stash for some fun things for the basket.

The basket, sadly, has been empty for quite some time now, so methinks a little rummage might be just what the doctor ordered.

So Happy Futzingday Eve, everybody!  What are you going to do to celebrate?

(*) Futzingay is nothing more than Wednesday, kids.  I named it thusly because I have a propensity to do absolutely nothing but futz on Wednesdays.  So I figured that an official day to do so each week would make me feel less like a slacker and more like a traditionalist.
Posted by Coni 6 comments: 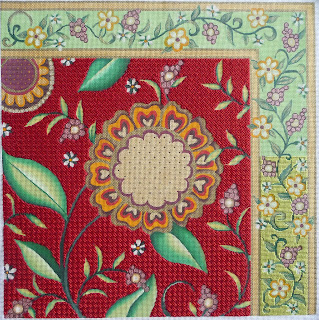 The red background on the Rishfeld canvas is now complete.  On to the green!
Posted by Coni 16 comments: