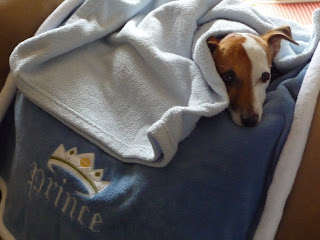 Today is our first official cool and blustery day here in Hoosierville. Stewey has decided to declare this the "Day of the Blanket" and spend it cuddled up on his perch. His little hands and feet were popsicles this morning, so I'm hoping he gets warmed up before my nap time. (*)

I worked on "The Riddle" this weekend, but the progress looks a little meagre in the light of day. I had completed a good portion of the bargello grass in between the two trees, but had to frog it and the tree on the left due to a temporary lack of counting skills brought on by a little overdose of hunky-tude. 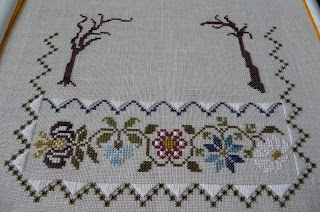 (I need to start writing things down: Never work on something that requires concentration when Gerard Butler and/or Jeffrey Dean Morgan are in the immediate vicinity of the TeeVee.)

I'm going to have a cup of tea now, and I am determined to figure out how to make a good one if it kills me this year. For some reason I think about how lovely a cup of tea would be, but then the end result leaves me a little...blech. Maybe I should stick with coffee?

(Wow. Such a big word for a Monday.)
Posted by Coni