THE MONDAY REPORT FROM MASTER STEWEY ANGUS WILLOWSWAMP, HIS VERY LITTLE SELF

My mom can't come to the blog right now. She's too busy stomping around the house muttering to herself. Apparently, she was watching television this morning while she was eating breakfast (Cheerios and skim milk, thank you very much), when she heard something that sent her straight into a "This is why the rest of the world should hate us" rant.

Three years ago, in an effort to help quell the childhood obesity epidemic, Sesame Street did something that (in my mother's opinion) is unspeakable. They replaced Cookie Monster's cookies with carrot sticks and apple slices. Now while I understand the need to shake things up a bit, you would think that there was an international announcement that Santa Claus is a myth the way my old lady is carrying on.

I wish I could share more of Mom's comments with you, but I truly find them to be so offensive that I fear a reprimand from the Blogger God His Very Self.

So that's how my morning has been.

On Saturday, Aunt Chrissy and Mom went to the South Bend Farmer's Market. (At least that's where I assume they went....God knows Mom doesn't get out of bed for ANYTHING at that hour, unless there's food involved somehow.) Anywhoose, they brought home a lot of lovely fruits and vegetables and these: 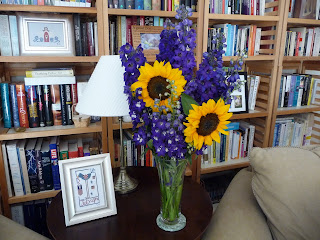 Aren't they pretty? I've really been enjoying them as I snooze on my perch. Methinks sunflowers are the prettiest things I've ever seen. I know Mom likes her daisies and all, but these suckers have really captured my attention.

Continuing the flower theme, here are the lilies that are blooming out front: 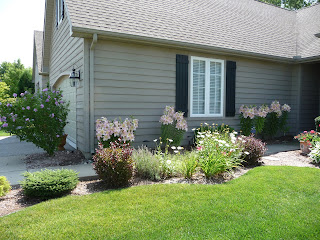 The smell of them gives me the sneezles, and Mom says that the front walkway looks like a funeral parlor, but I think they're just lovely.

So does my friend, Teddy: 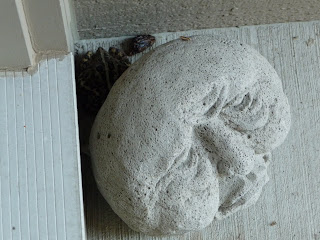 Can you see him there? He's kind of tucked in behind that creepy rock that Mom keeps on the front porch. The thing behind him is actually a piece of garden mulch, and NOT a huge piece of frog poo. (I was pretty impressed until I realized what it was.

Mom and Aunt Chrissy tried to can jars of cherry preserves, but (as usual), my idiot mother screwed it all up and it has to be re-done tonight. Aunt Chrissy promised to go to the hardware store tonight to get the proper tools, especially since there was a lot of yelling and cursing going on with the "improvised crap" that they were trying to use. So this is what it all looked like before: 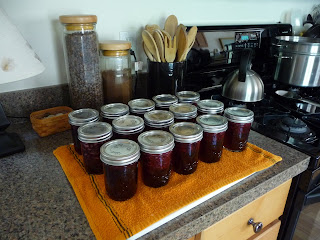 Everything sealed properly, but Mom didn't use enough pectin. So instead of the stuff being nice and thick (and spreadable on some toast), it was more like cherry flavored water. Hopefully, they'll get it right tonight and I'll have preserves this winter for my afternoon tea and scones!

Mom's still plugging away on LHN'S "My Needle's Work". She was trying to get caught up on all of the DVR shows she's taped, but apparently she cannot watch "Masterpiece Theater" and count at the same time. So progress is a little slow: 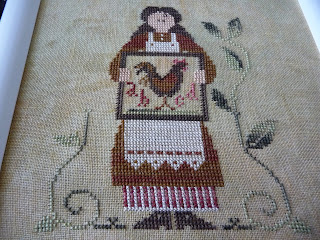 I'm going to make her finish this one before moving on to something else, because I think she should put this in a little frame next to the Happy Chair. (See? I'm always thinking.)

Well, that's my report from Chez Spinster today, kids. I do hope that you all had fabulous weekends and that you're off to a splendid start to your Monday!