PUMPKINS(!) AND SOME VIEWER MAIL

The stroke of midnight found me in the Happy Chair hooting like a blow fish over the fact that I finished stitching the pumpkins on my Harvest Moon House project.  Why in the world did it take me three weeks to get this far?  Only the shadow knows..... 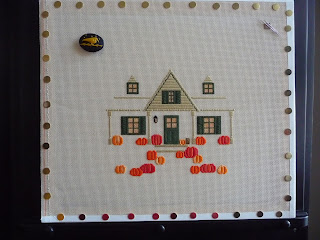 I would like to take a moment to send out a big fat teary THANK YOU for all of your lovely comments about my little hovel.  The truth of the matter is that I am feeling rather sad over the state of affairs here at Chez Spinster, so your encouragement was just what I needed to get on with it.  I built the place in 2002 and had every intention of making this my little dream house.  Sadly, Dad got sick in the midst of it all, and I never really seemed to "finish" things quite the way I had hoped.  Then once he passed away, the time started to fly by and my motivation for making a cozy nest for him to visit seemed to diminish rapidly.  I celebrated 10 years of living here in November with the writing of a list of things that I would like to accomplish, but sometimes I get completely overwhelmed with the prospect of it all.  Thank God for Aunt Chrissy, or I'm pretty sure that I would have moved into my car years ago.

Your comments about the state of affairs here make me think that I might be on the right track, though, and they give me the motivation to push a Swiffer around every now and then.  Thank you for that.

As for the decorations, I'm afraid that can't take any credit whatsoever for them.  My little sister took it upon herself to completely re-do Christmas around these here parts, and all I did was push the shopping cart in the Hobby Lobby.  Does she have a great eye, or what?

Oh, before I forget.....I get a lot of emails asking to explain the whole Aunt Chrissy name situation.  Aunt Chrissy is actually my sister, Crys.  She is called Aunt Chrissy because that is the name that Stewey insisted upon the moment he laid eyes on her.  I call her Aunt Chrissy, even though she is my sister because like any self-confessed Sopranos fan, I have always wanted the Rich Sister equivalent of an Uncle Junior.

How's THAT for making it even more confusing?!

Miss Marcy asked about my bookshelves.  They are from a company called "Shelf Expressions".  Here's a picture for you, Marcy ('scuse the dust): 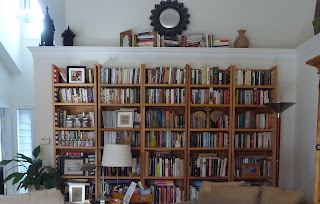 You probably can't tell it from my craptastic photo, but the shelves are unfinished wood against an off-white wall that is bordered with white crown molding.  I promise you that there was absolutely no thought that went into this....I just happen to like being surrounded by books and this seemed like the best place to put these shelves at the time.  God willing, I'll have a proper library someday, and these shelves will end up going to a good home.

OK, time to go holler at a bill collector.  I've had a "gentleman" calling here all day looking for Stanley Wapshot.  Apparently, Stanley owes somebody a lot of money and decided to run for cover.  The only problem with Stanley's plan is that he gave them MY phone number.  The best part is when the "gentleman" calling for Stanley asks me if I'm SURE Stanley isn't here.  Um, gee.  Let me check.  There's an aggravated spinster, a handful of thirsty looking houseplants, and a little dog in a smoking jacket.  But a Stanley?  Nope.  No Stanley.  I'm pretty sure I'd know if I had a Stanley.  I'm trying to remember myself and not go nutso on this guy, but I'm pretty sure that my Jersey is going to show by the end of the day.  Stay tuned!
Posted by Coni