IT'S ALL OVER BUT THE SHOPPING. (AND THOSE DARN GREEK COOKIES TOO)

As was expected, I overdid it this weekend with the whole "Let's get this house tarted up for Christmas" idea.  It started innocently enough on Friday night when Aunt Chrissy and I did our weekly grocery shopping.

"I'm going to get the ingredients for Greek cookies", I said emphatically in the baking needs aisle.

Aunt Chrissy gave me a look that said "I don't want to hear it when you pull a muscle trying to mix the damn dough, but I sure would love a bag of them for my morning coffee/commute."

So I got the ingredients for the Greek cookies and them promptly procrastinated all weekend so that I wouldn't have to face the fact that I've been trying to make these bloody cookies for 46 years now and for 46 years I end up in a teary heap on the kitchen floor.

It's a good thing I don't drink alcohol, or we'd surely be looking a few empty wine and/or vodka bottles rolling around on the floor with me.

So Christmas threw up all over Chez Spinster, and for the first time in a great while there wasn't too much gnashing of teeth as the last decorations were hung.  I suspect that this has something to do with the overabundance of red feathers everywhere, even though I am certain that there is absolutely no scientific evidence whatsoever that Santa Claus ever came near a batch of red feathers.

Maybe in his younger days when he performed his drag act?  Hmmmmm.  I wonder what his drag queen name would have been?

See?  Thoughts to ponder on a Monday morning.

Here's the final result of the comings and goings of the weekend.  There was precious little stitching that took place, but God willin' and the creek don't rise I will have a threaded needle in my hand as soon as I turn off this silly machine and hit the Happy Chair. 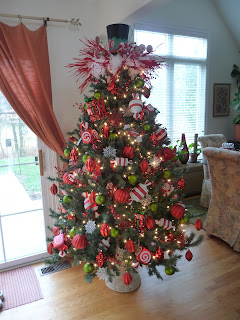 I'm not really sure what's going on here.....suffice it to say I think I got a little too jiggy with it: 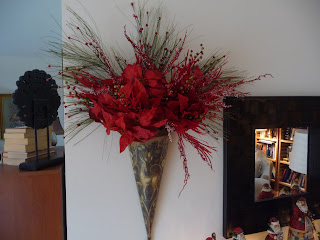 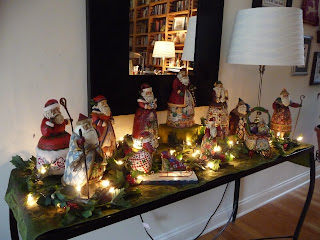 The Big White Wall of Nothingness, covered with a few stitchy pieces: 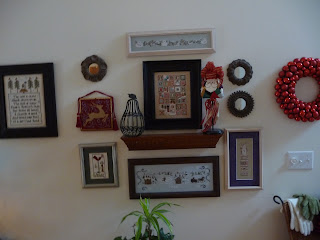 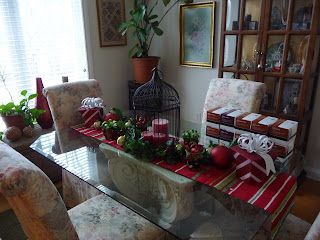 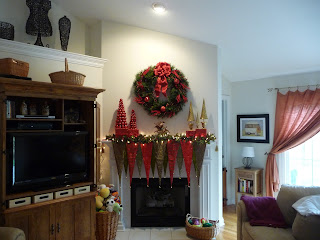 And last, but certainly not least, is you-know-who.  He thinks that if he sits there and stares at his treat closet I'll cave and get him a Snausage. 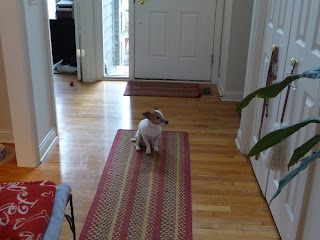 Stop that snickering, please.  I only got the Snausage because he was a good boy and went into his apartment when I went to the dentist this morning.

That's the Monday report.  I hope that you weekend was full o' fun and that you're off to a great week!