She was left to her own devices. Against all better judgement and against all federal, state, and local authorities, my stupid mo-ther was allowed to spend time in the kitchen yesterday -- concocting God knows what until it was time to haul her off to bed.

She futzed and grunted and stirred and whipped, and after a few hours I heard her tell my Aunt Chrissy "OMG! You will not BEE-LEEVE what I just made!!!! I just made a TURTLE PUDDING pie with homemade toffee!!"

Apparently, the recipe called for caramel ice cream topping, and since she ate all of that on the ride home from the grocery store last week, she had to make it from scratch. (Or, in this case, from a recipe that she saw on the Ina a few weeks ago.) Butter, brown sugar, cream, and vanilla. Bring to a boil. Let is rest. Vwa-la.

Then she spread that in the bottom of a graham cracker pie crust, topped it with the TURTLE flavored pudding, and then piped whipped cream all over the top of it.

(Gag orders issued by the courts prevent me from describing what happened next, but let's just say that I'm not sure I'm ever going to get the stains out of the front of her old lady sweatshirt.)

Aside from all of those shenanigans, she did manage to hang her Prairie Moon piece in The Gallery. (OK. It's only the hallway that leads from the laundry room, but we need all the help we can get trying to sophisticate up this place, so a "Gallery" it 'tis.)

I don't know if you will be able to see the frame, but it has lovely highlights that match the color of the linen: 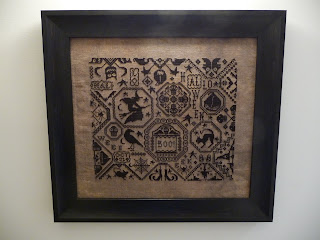 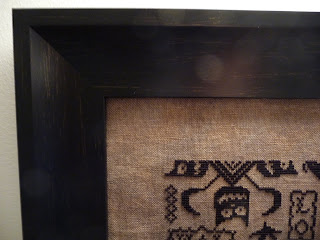 There was also a bit of stitching on the Prairie Schooler piece, and I would guess that it was the pie next to the word "doorway" that prompted the whole TURTLE pudding experiment: 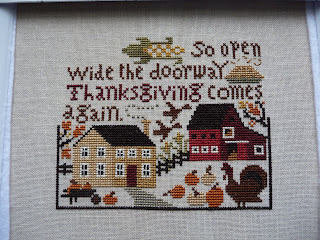 Other than that, it was a rather un-eventful weekend. Mom and Aunt Chrissy ran errands on Saturday and came home giggling about going to the Rural King for trash cans and bird food. You would have thought that they had discovered Mars or something the way they were going on about it. From what I know, the Rural King is simply a store where you can buy everything from tractor parts to marshmallows, so I'm not sure why they were surprised at the availability of cheap bird food and trash cans in which to store it.

That's about it for a Monday. I'll let you know how long the TURTLE pudding pie lasts.

P.S. I've just been informed that TURTLE pudding does not, in fact, taste of actual turtles. So with respects to all of the above....well...nevermind.
Posted by Coni