A WEDNESDAY REPORT FROM MASTER STEWEY ANGUS WILLOWSWAMP, HIS VERY LITTLE SELF

As you know, Wednesday is supposed to be FutzingDay here in Crazy Towne, which means that the 'puter is supposed to be off limits. I am, however, in desperate need of a little sane company, so I thought I would write.

The old lady is presently sprawled in the Happy Chair watching Jeffrey Dean Morgan in The Losers again. It's been on an endless loop for about three days now, and if she looks up at me one more time and says "Stewey, don't you think my future husband Jeffrey Dean Morgan is the most handsome man you've ever seen?" I'm going to run away from home. I get the fact that she's a lonely old spinster and he's a man who knows how to wear a white dress shirt and facial stubble, but for the love of Mike, does she have to use the freakin PAUSE button that much?!

On the stitchy front, here is her progress on Beekeeper's Cottage. I show you this photo not for the stitching, but for the spanky new needle minder that my Aunt Chrissy bought. Isn't it swell? (Yet another thing that I love about my Aunt Chrissy. She really knows how to accessorize even the most modest needlework project.) 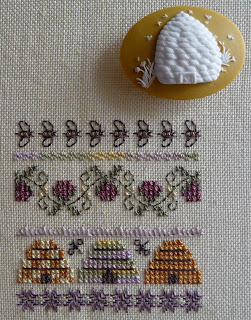 Next up is a new piece called Acquamarine. Mo-ther has been such a sweaty hot mess these last two weeks, that I shoved her up into the studio and told her not to come down until she found something that would make her think cool thoughts. I think this one does the trick, don't you? (She's using her own thread combination on this one that includes the Vineyard Silk colors Iceberg, Seaport, Reef Waters, and Seafoam. And the Watercolours are called Oasis and Mediterranean. Appropros, no?): 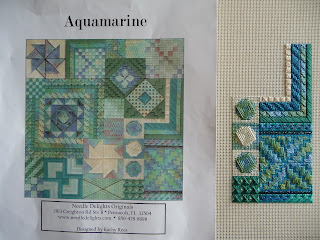 Once again, I have my Aunt Chrissy to thank for another brilliant idea. This is a scrapbook organizer that she bought at the Michael's for Mo-ther on Saturday: 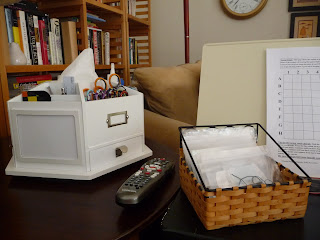 They originally went there because Aunt Chrissy had spied an organizer cart for herself, but as is her usual custom, my mo-ther threw a big fat pout right there in the store so that Aunt Chrissy was forced to by this thing just to shut her up. I will admit that it is much better than the big basket crammed full of crap that used to sit on the chair-side table, but it has greatly reduced Mo-ther's stitchy time. Instead of plying needle and thread, she just sits in the Happy Chair and twirls this thing 'round and 'round while cooing to it gently. (It sits on a lazy suzan type mechanism and allows you easy access to all of its various and sundry parts.)

Cooing, mind you, is something that I have not been the recipient of in quite some time. If the old lady doesn't remedy THAT situation pretty soon, I just might have to water the drapes. 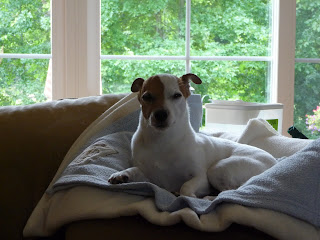 That's it for now. I'm going to throw my stupid mo-ther into a cool shower and then ignore her for the afternoon. She ran a ga-jillion errands yesterday and tended the garden, so I suppose she's earned it.