**Hey, kids! Thanks for your nice comments that the Ultrasuede is fabulous on the Cirque de Fleur piece. I agree, but am afraid that I cannot take any credit for this idea whatsoever! All praise belongs to Ms. Orna Willis Her Very Self, the designer. I wouldn't want y'all to think that I had a decent thought in my head, after all. I have a reputation to uphold!**


Grandma Rich used to come visit with us every summer (to escape the Phoenix heat), and one of the things I remember most fondly was watching The Lawrence Welk Show with her. I'm pretty sure that we had red pop and then we tuned in to Marlin Perkins Wild Kingdom and then ultimately The Wonderful World of Disney. Remember all of that?

So last night as the clock struck midnight I had a "And a one and a two" kind of moment as I finished not one, but TWO pieces that I had been working on! (Can I get a big WOO HOO from the congregation, please?) 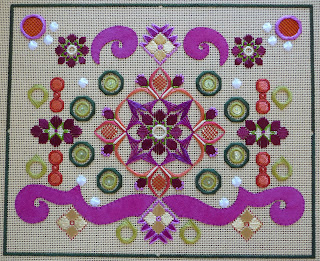 Who knew that appliqueing Ultrasuede to a canvas could be so darn satisfying? (Oh, and for those of you who asked about this one....it was a cyber class that was offered by Miss Orna last year. What can I say? I'm a little behind schedule.)

And next up is Sew Much Fun's Love insert, which I think is supposed to go in the front of a purse or something. I'm going to make it into a little framed piece for Valentine's Day: 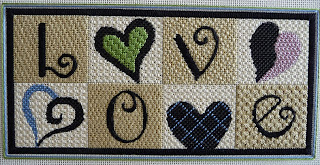 Ahhh, bliss. Three finishes for the year and two of them were WIP's. Now THAT'S a trend that I hope continues, especially since I made a list of every single WIP known to me in the whole entire Spinster Stitcher universe, and I'm thinking that it's time to tackle that puppy once again.

We're off to the weekend! Chicken wings and chip dip for everybody!
Posted by Coni