WEDNESDAY'S CHILD IS FULL OF....

Is it possible to have a rational, adult, reasonable conversation with a five year old Jack Russell terrier?

As you all know from this here blog, my little dog Stewey has a propensity for peeing on things. Like drapes and ottomans and the errant landscaper. I believe that this is the result of severe anxiety, as well as my utter lack of parenting skills. As Aunt Chrissy pointed out a few weeks ago: "He pees on his TOYS! What dog does that?!". This, from what I can gather,is evidence that he also suffers from some form of massive territorial marking behavior and anything that is within his purview is going to get watered whether it needs it or not.

So we fast forward to a Tuesday when Mommie Dearest here was semi-lucid and decided to do something about this situation. I gathered every single toy in the house and then washed and dried them very carefully with all kinds of disinfecting soap and whatnot, and the result was wonderful. Clean, fresh smelling dog toys without so much as one drop of...well, you get the idea.

I remembered from my early Puppy Mommie classes that if you give your dog one or two toys at a time he will enjoy them more and will get a big kick out of it when you introduce a new one every now and then. So I went through the basket carefully and pulled out all of the autumnal/Halloween toys and decided that THESE would be the ones he could play with.

As I settled into the Happy Chair last night for some serious West Wing watching and stitching, I realized that I hadn't seen Stewey for quite a while. So I started calling and calling him and reached a crescendo of panic when I got down on the floor to see if he was in his fort and there was nothing there but the remnants of his last poker night. (I need to remember to speak to him about that, by the way.) I must have looked for him for a good half hour, and considering my house isn't that big, this meant that I was opening every drawer and door in the place to see if he was trapped under something heavy or if he had escaped to a "forbidden area" to hatch a plan for world domination. And (!) despite the thunderstorm that was raging outside, I ran out to the back patio to see if I had maybe let him out and then neglected to remember to let him back inside. (No, I've never done that before, but if you know me you also know it's just a matter of time before I do so.)

I had the phone in my hand and had six of the seven Aunt Chrissy digits dialed when I rounded the corner to the guest room to see my little nine pound bundle of love sprawled out in front of the baby gate...sleeping peacefully within eye range of: 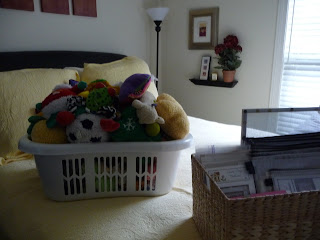 I suppose that his thought process was that if he couldn't play with them, at least he could lay on the floor and look at them until his mean old Mommie relented and carried all of them back to the family room where they belong.

So I'm off to Michael's to find a bigger basket. Damn dog.

In other news, here's an update of my progress on Quaker Diamonds. I made it to the tippy top last night! I've reached the summit! The end is in sight! 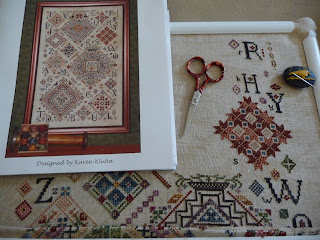 Finally...I'll leave you with a pic of what I did with the veg yesterday afternoon. I fished through the bins in the fridge, came up with a few things that looked like they wanted to take a swim, peeled about eighty cloves of garlic, and then tried my hand at my very own gardeneria: 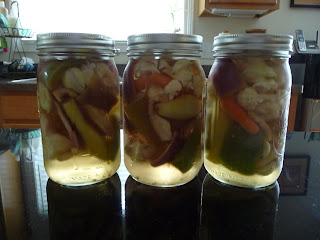 I have to say....it looked much better when I stuffed the jars. Everything was brightly colored and crisp and lovely. Now....not so much.
We're off to a Wednesday! I hope yours is wonderful!