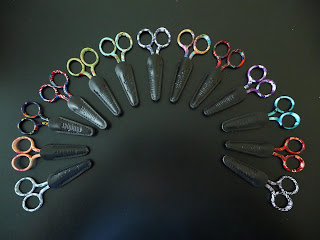 Aunt Chrissy gave me my first pair of Gingher scissors sometime in the year 2006. I suppose that she felt I had progressed beyond the little kindergarten safety scissors that were in my stitchy bag for several months, so she went right out and bought me a lovely pair of Julias.

As anybody knows, I am not exactly what you'd call a "moderate" person, so within the space of about six minutes I decided that collecting these scissors was going to be my "thing" (and I think I told Aunt Chrissy that it was going to be HER thing too), and I set about trying to get a comprehensive list of every single one that has ever been released.

(What is it about me that does this? If something is part of a series or collection, I am compelled to start at the start and end at the end. I do this with books, TeeVee series, music...anything that has a "chapter" or "part" or "for the year" on it means that I will drive myself nuts trying to find the very first one, and then look for the second one, and then the third, etc. etc. etc.)

(Good thing I don't do this with automobiles, or I'd be out there trying to collect the very first Pontiac, followed by the very second Pontiac....)

(I wonder if it has to do with some strange propensity that I have for order? And, furthermore, I wonder if this propensity comes from my childhood when I played in the sandbox and tried to organize all of the sand according to the overall shape, size, texture, and color of each individual grain.)

(What can I say? I was a weird child who grew up to be an even weirder adult.)

It took me about three years of searching on the internets, but I think I've come up with a comprehensive list of all of the Gingher Designer Series Scissors. I don't have the EXACT dates of their releases, but I think I at least have the proper year.

Now you might wonder what prompted me to write this. Aunt Chrissy and I jetted over the JoAnn's last night to pick up our latest addition to our sets...a JoAnn's exclusive called Ella. We both walked into the store with the idea that we were going to pay full price for them, since neither of us could find a coupon for the place to save our lives. But when we got up to the check-out counter, the lovely Melanie told us that we were going to get them for 40% off and I think I startled the poor woman by jumping up and down, clapping my hands, and then bawling with joy.

Needless to say, it's going to be a while before I go back to JoAnn's.

Now for those of you who think this is a ridiculous way to spend my money, may I just point out that I found a pair of Audreys on the web AND THAT THEY WERE ALMOST FOUR HUNDRED DOLLARS!

Nope, didn't even think about buying them, but I was totally gratified to see that a few of the scissors in my collection have already gone up into the two hundred dollar range. That means that if I paid about twenty bucks for them, they've given me about a gillionth percentage return on my investment.

(Aren't you glad I'm not your financial planner?)

So, I suppose what I'm trying to say is one very big fat THANK YOU to my perfect little sister for insisting that I run right out with her every single time these things are released to fork over my pennies for the latest design.

Now if I could only start and the start...

Here's the list that I came up with. If you are a Gingher collector, or if you happen to know someone who is and you see that my list is completely and totally wrong and out of date, would you be so kind as to let me know? I'm getting ready to laminate this sucker, and God knows the tizzy fit I'll go into if I find out that I missed anything.