My mom can't come to the blog right now. She's all weepy and va-clempt over the love that y'all sent her over her ridiculous shenanigans. I tried to tell her that you probably make fun of her in secret and that she really shouldn't prance around the house with my tiara on her head, feeling like the Supreme High Exalted Princess of the Universe Because So Many Nice People Make Her Feel Special, but she didn't hear a word I said.

So please allow me to send a very heartfelt thank you out there to Stitchy Blogville for your kind boo-hoos over my mo-ther and her stupid propensity for getting herself in trouble with the most mundane things.

As for me, I thought I'd give you a little peek into my day so far. It started bright and early when I decided that Mommie Dearest needed to get out of the bed already and take me for a walk around the block. She wasn't at all happy about having to put on a b-r-a that early in the day, but she did so and hauled her fat heiney around the 1/2 mile block two times in the spirit of finally losing enough weight to stop qualifying for her own zip code. This would have been really really good had she not come into the house and decided on a tomato bagel for breakfast. She takes an everything bagel and smears chive/onion cream cheese on it and then tops that off with a thick slab of tomato. I suppose it's not the WORST thing she could eat, but would a smoothie every once in a while kill her? How about some yogurt or oatmeal? Good God...doesn't she realize that the calories and fat content are bad enough, but that the BREATH is enough to knock the hands of a clock?! Oey.

I trotted out to the back garden to do a little weeding for the old lady once she jumped into the shower. Our very back garden has been looking terrible all summer long, so I decided to get out there with my gloves, hat, and clogs on and see what I could do to remedy the situation. I think I did a pretty good job. Here's me checking out my progress after I had bagged and removed all of the detritus: 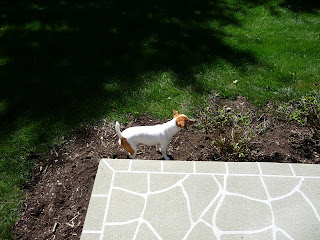 I also wanted to make an official apology to Mom over her previous decision to whack the rose bush to within an inch of its life. Apparently, it's just what the damn thing needed: 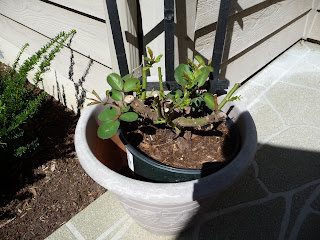 Finally, I'll give you a glimpse of the progress on Quaker Diamonds. At the rate she's going, we might actually have to start thinking about a frame for this one by the end of the month! I believe that she is now almost finished with the fourth section, so that means she only has five to go. But, based upon my calculations, I think she might be a little more than half done with this one, since the top doesn't seem to have as many large moteefs. 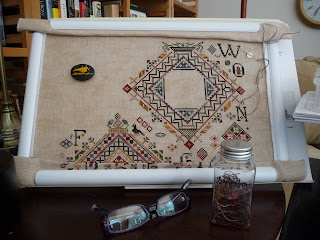 That's the report from Lake WoeBeSpinter today, folks. We're off to a fast-paced week of eye exams and mammograms. All she needs now is a lady doctor appointment, and all of her parts have been officially checked out for the year. I had my check up last Tuesday and am happy to report that I remain, as always, perfectly perfect in every way.

I hope that you have a splendid Monday and the week brings nothing but good things to you!