Before we begin today's drivel, I feel it absolutely necessary to reveal several interesting facts about myself.

1) Despite being only 43 years old (ahem), I am tragically UN-hip. (Good grief! Am I so out of touch that even the word "hip" is now out of fashio, and I'm revealing myself to be an even bigger dork than I think I am?!)

2) On the rare occasion that I actually leave Chez Spinster, I am safely belted into my vehicle, hands at ten and two, and not one distraction to...um...distract me from driving. This means that I usually do not turn on the radio to listen to commercial radio stations.

3) When I do listen to the radio, it is as a sleep aid, and the channel is tuned to the BBC America on our public radio station ( Helloooo WVPE!), and I normally wake up with strange questions about Climate Summits in Copenhagen, or what the latest issue is with our presence (or lack thereof) in some part of the world that probably didn't even exist when we studied Geography on that one Wednesday in eleventh grade.

4) Aunt Chrissy and I were raised by two parents who didn't get too excited about anything as we were growing up. When some of the parents of our peers were "outraged" or "scandalized" by what was showing up on the TeeVee with its brand new MTV channel, Mom went out and bought another Glen Campbell or Barry Manilow album and we got on with it. (Which explains a LOT about me and my current state of affairs....one year I asked for "records" for Christmas and I got "The Definitive Steve and Edie Gourmet Collection" and something by Henry Mancini.) (This was in 1983.) (Sigh.)

So all of this is by way of explanation so that you will understand where I'm coming from when I tell you that I'm still a bit baffled by this Barbara Walters "Most Fascinating People of 2009" thingie I saw parts of last night. (I would have watched all of it, but I wanted waffles.) (Stewey, however, was positively riveted to the screen, and he took notes for our nightly Pre NightNight Discussion.)

The first "HUH?!" that came out of my head was when a gal named Lady GaGa was presented. (Or was it GoGo?). (Hmm. Maybe it was GiGi?). Anywhoose, all I caught were some snippets of Barbara saying "clothes off", "scandalous", and what I think was, "boobies". My very brief search for Madame GaGa this morning told me nothing other than the fact that this person does indeed like to show her boobies. Apparently, a lot.

Now please understand I'm not at all terrorized by the thought of anybody showing their boobies, and as a matter of fact, I would happily share mine with the world if I could get them out of my shoes long enough to see the light of day. (I have issues. Leave it alone.)

I listened as Barbara talked all about this woman being "blah blah blah", and I said to myself "Isn't that Madonna?". I mean, come on. Didn't Madonna show her boobies and dance around and terrorize the Queen of England too? Is this Lady Whatever really THAT original?

So as I pondered this and ate my waffles, another "entertainer" was featured. This time, a raven-haired, eyeliner-wearing, black nail polish-toting young man appeared after a clip of a performance he gave at some awards show.

Now here's where I tell you that I've never seen American Idol, and the only thing I really know about it is that there's a British guy on there who wears t-shirts that are entirely too snug for him (in my humble opinion). (Talk about boobies.)

So I guess this kid...Adam Lambert?...is being vilified for...well, I'm not exactly sure what, but I know that it involves a lot of parents upset that their children were exposed to his shenangins. So as Barbara is blathering away about this guy being banned from Good Morning America and whether or not this "scandal" will hurt his career, I again looked sideways at the Tee Vee and said (to no one in particular this time)..."For cryin' out loud! Isn't that Adam Ant?!".

So here's where the confused part of me comes in: I'm not sure I'm understanding all of the fuss about some of these "entertainers" these days. Aside from Susan Boyle, who bucked tradition with her unruly eyebrows and sensible shoes, it seems to me that most of what's out there today is just a re-hashing of everything that has gone before. Am I completely off base here? Should I just go back under my rock and forget about it all?

And if these "entertainers" are so shocking to the world, why not just say what my mom did to me when I asked her if I could get my ears pierced and go to a boy/girl party: "Yes, if you make your bed every day, and no, not until you're 30."

So that's my pondering for the day. On to some stitching....

Here's my progress on the 4 Patch Santa Sampler. I've finished the background on the first little guy. All he needs now is a pom pom for his hat and he will go on the finished list. 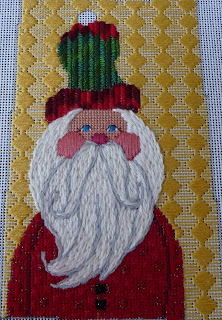 I think that I will switch to the Raymond Crawford this evening, since I received the next installment in the mail a few days ago. I'm also thinking that I might want to kit up Laura J. Perin's Malachite Maze with some Christmas colors, but that might involve a trip to the LNS for provisions. (How sad is it that I wouldn't consider a trip to the pharmacy for meds today because of the weather, but when I just typed "LNS" I started looking for the keys and my outside shoes?)

Aunt Chrissy will take me to the fancy eyeglass boutique tonight to pick up my glasses again. I had originally ordered them with "Transitions" lenses, because I thought it would be soooo cool to be able to walk outside and have instant sunglasses. It turns out that my stitchy lamp was activating them, so I was sitting in the Happy Chair looking like I was just too cool for the room. (Or like I was going to break out a guitar and start playing the blues.)

I hope that wherever you are is wonderful today. Stay warm and safe and dry and don't forget to tell me all about it!
Posted by Coni