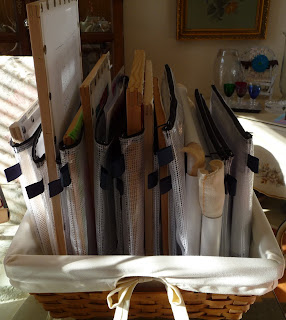 You know that expression "Water, water everywhere, and not a drop to drink?". Well, that pretty much sums up the overall state of the Spinster Stitcher union these days. I have an embarrassing abundance of riches all kitted up in the Christmas Stitching basket, and yet all I can seem to do each night is put it on the ottoman and stare at it.

I do, however, have a plan. (I can hear you saying "Uh-oh" all the way over here in Hoosierville.) I've decided that I can do anything for fifteen minutes, so tonight I'm going to pull a project and start stitching it for AT LEAST that period of time. No excuses. No bitching, whining, or complaining. I'm just going to stitch on something for fifteen minutes and then see how it goes from there. If I get bored or dissatisfied, I'll put it down and fret about it later. But! If it kicks me back into Stitchy MojoTowne, then so much the better!

I see that Stewey filled you in on all of the shenanigans around here for the BIG FEAST OF A MEAL DAY. We're still not sure what happened exactly, but the food was better than it ever has been, and most of it was delivered to the table piping hot. (That's one of my pet peeves...hot food that is presented...eh....not so much.) Ina's Sagaponak Corn Pudding was definitely worth it, so I'm pretty sure that I'll be making that one for years and years to come. Aunt Chrissy made the pies (yes, we had more than one pie for just the two of us...leave it alone), and I have to say that whatever she did to the pecan one was really really good. (She claims to have burned it, but I think it was just superb).

The Christmas tree really isn't THAT bad, and I think Stewey is finally warming up to it. He stopped complaining about it when I pointed out that last year we almost didn't have a tree at all, so he should be happy with whatever ends up in that urn. Now if I can just get the rest of the decorations up, all will be peaceful in the kingdom once again.

By now the entire world knows that Notre Dame is looking for a new head football coach, and yes, in the event that you were wondering, I've thrown my hat into the ring. Considering I know absolutely NOTHING about the game, I'm not optimistic that I'll be called in for an interview, but what I lack in experience, I figure I make up for in sincerity. (Besides, won't the uniforms look snazzy with the players' names embroidered on the back?)

We're off to a Tuesday! Laundry will be finished today or I'm hauling it all to the Goodwill. Sometimes I feel as though a little tough love is in order for myself, and I issue threats as a motivational tool for getting stuff done around here. If you see me wearing the same sweatpants and sports bra for the next several months, you can probably guess that there wasn't much laundry washing that happened after all.

Happy Day to you all! I hope that your little corner of the world is simply fabulous and that something delightful happens to you today!
Posted by Coni