BAGELS, BIRTHDAYS, AND BONFIRES (OH MY)

Today is my nephew Puppy Tot's birthday. Bosco is officially three years old today. Although the grand celebration won't take place until tomorrow, he was happy to sport the little birthday hat for a few pics. 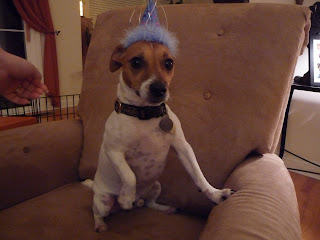 And then he wasn't. 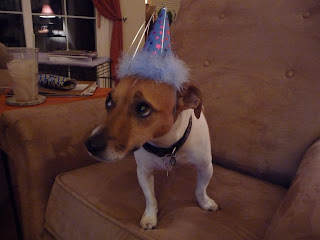 EDITED TO ADD: Yes, Bosco and Stewey are related. They are cousins. Bosco's mother Twiggy and Stewey's father Angus are brother and sister. So the Spinster Sisters' pups are actual cousins....creepy, or what? Their last name is Willowswamp, because the name of the "farm" where they were born is called the Willowswamp Farm.

Stewey was seemingly nonplussed by the whole affair and kept himself glued to "Something's Gotta' Give" on the DVR thingie. He thinks the house that was used for filming is spectacular and I caught him Mapquesting Sagaponuk on his laptop shortly after the movie started. 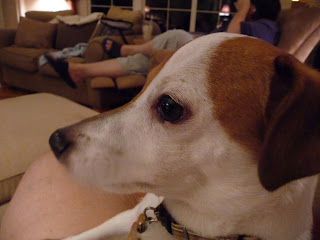 Aunt Chrissy and I had a great cook out while Notre Dame was getting beat by Michigan State and we whipped up our very first batch of bagels after things had settled down for the night. I must say that for a first try they are fabulous! Methinks this might be a weekend ritual for the winter. I loves me a damn good bagel, and I haven't had one since leaving New Jersey in 1999. Sigh. 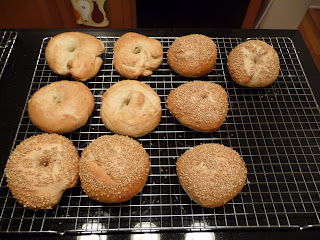 Don't tell anybody, but we used pre-made pizza dough from the grocer's freezer. We shaped them into balls, poked a hole in the middle, dropped them in boiling water for a few minutes and then baked them at 400 for about a half-hour. Perfection.

Then we decided to ruin somebody's party by calling 9-1-1 to report a fire that looked like it was ready to engulf an entire city block. Turns out it was only somebody having a bonfire in their backyard, but thanks to the Spinster Stitcher, Aunt Chrissy, and the St. Joe County Fire Department, we put the kabosh on that one, I tell ya'. Seriously....when I drove Chrissy and Bosco home we noticed a few of her neighbors out in their driveways looking at something. Upon further inspection, we saw a huge fire and immediately called for help. (OK, so we weren't the only idiots who did...the neighbors claimed they heard an explosion and did the very same thing.) So if you live near Day and Fir Roads in Mishawaka, Indiana and had your big party ruined by some nosy neighbors, it was us. Sorry.

I'm off to the Happy Chair for some stitchy time. I started a new project last night but in the light of day decided that the thread choice was so WRONG WRONG WRONG! So I think I'll set it aside for a few days and pick up something else for a bit.