WILL SOMEBODY PLEASE REMIND ME TO STAPLE MY CAMERA TO MY FOREHEAD?

I had so many things to show you, but completely forgot to photograph them! As usual, I kept getting distracted by shiny things and Chinese food (yikes!) and now I'm here in the d-chair without evidence (but a few extra ounces of bloat from the low sodium soy sauce that is just that...LOW sodium, not NO sodium).

The fern got a BIG haircut...can you say "now a big pot of dirt"...and I soaked and fed the bejeebers out of it and put it in front of the patio window. I have absolutely no idea if the thing will survive or not, but I figure that's why God made garden centers.

As for the succulents... 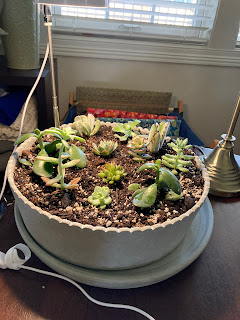 The amazon driver wasn't out of the front parking lot before I stuffed these babies into the bowl and slapped that grow light thingie on them. This is my last attempt. I figure I could have bought a lot of great stitchy stuff with what I spent on stupid succulents these last couple of years. It's either now or never.

(But I do think the grow light thingie really is the key, and if I didn't think it would make me feel like I was living in a weird plant-growing lab, I'd get them for all three of my plants.)

Stitching-wise, I had an epic fail with the Ehrman daisy: 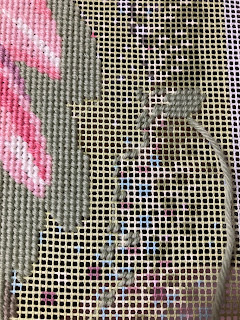 You more astute observers will see what I did there immediately...I reversed the direction of the stitches! Then, just for giggles, I did it TWO MORE TIMES before making the sign of the cross over this one and tucking it away for a minute.

I did pull out Eliana and spent a few hours with her while watching/listening to A Star Is Born. (Oh, who am I kidding...I was watching/listening to that deliciousness called Bradley Cooper. I don't care if he looked like he needed a good bath and actually sounded like Sam Elliot's little brother...he can darken my doorway any damn day of the week.)

I don't have pictures of Eliana, but suffice it to say, she is coming along quite nicely indeed.

Today is a total crap shoot as to whether or not I get anything done. Monday's treatment knocked me out completely, and yesterday was a full-blown pj day. The list is pretty long and contains all of the stuff I wanted to do while Rich was in New Jersey.

Oh well, that's apparently what Thursdays are for, right?

Time to close my eyes, I think. My podmates are already snoring away in their chairs, so it looks like I might have to don some 'phones and catch some shuteye myself.

Happy Futzingday to one and all! I hope you'll do something swell and will come tell me all about it!