Here's a brief look at what my universe consists of today (minus one very fussy little dog who simply refuses to be photographed without his glam squad present):

Eating (not in the picture): Greek yogurt with granola and dried cranberries

Drinking (also not in the picture, but there, I promise): Starbucks French Roast with Truvia and a splash of half and half

Exercising: The Jumble, Sudoku, and crossword from today's paper  (Wait...you didn't actually think I meant exercising, as in do something other than sit in the Happy Chair, did you?  Remember, I'm an Olympic gold medalist in sloth, folks.  Gotta keep in shape for Rio.)

Reading: Just finished "A Strangeness In My Mind" by Orhan Pamuk

Planning : Added a list of errands that I need to run (like go to the library to get another book to read), as well as several calls I need to make into Erin. (That would be my Erin Condren Life Planner thankyuverymuch).

Cooking: A feeble attempt at minestrone is bubbling away on the stove, but I'm not optimistic.

Cleaning: Don't you think it adorable how I keep putting this on my list, but end up taking a nap "instead?  Dust bunnies....just part of the charm of Chez Spinster. 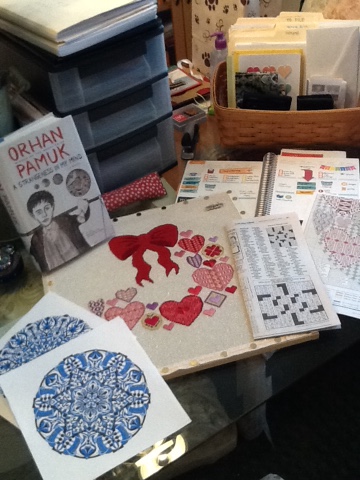 What's going on in your universe?
Posted by Coni