A SUNDAY AFTERNOON POST BY MADAME FLAT GRANDMA FLOSSIE, HER VERY LITTLE SELF

I can't tell you how ready I am to get the hell outta here. I've been to some pretty interesting places in my life, but this Funny Farm needs to have a sign at its entrance that says "Beware all who enter here."

It all started when the little spinster (we'll call her Spinster Minimus) called the big spinster (that would be Spinster Maximus), and said "Put your shoes on and get those quakers out of the fuppy box. I've got a 70% off coupon at the Michaels' and I want to go get them framed".

To which Maximus replied "Well, um, er, I gee...I hadn't planned on getting those framed right away. And besides, it's all hot a icky out and Flat Flossie and I were just getting ready to sit down and go through all of my scrapbooks and memory boxes and photographs from my grade school career."

Thanks be to God above, Her Very Self, the little one showed up ten minutes later.

"Get in the car. We're getting this done today so that when you drop dead I can hang them in my living room. Is the doll going with us?"

At first, I will admit that I was rather offended, but then I considered the fact that this poor woman has a crazy spinster sister and a little talking dog wearing a smoking jacket to contend with. It's any wonder she's not more in her cups.

We headed out for the Michaels, but what should have taken a half hour turned into an all day event. My goodness, but these two like to run their errands! Our first stop was the medical lab for some bloodwork, and then it was off to McDonald's for an early lunch. (I had a salad. They did not.) After a quick run into Wal Mart for contact lenses, we were finally ready to pull into the Michaels' parking lot: 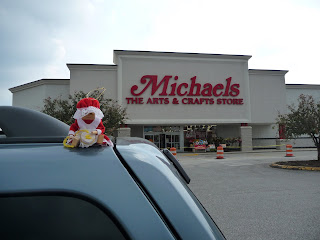 No, I didn't ride on top of the car, but I can tell you that I definitely would have preferred it to the chitter chatter and old lady driving habits that I had to endure from the back seat.

Once inside, we spent several hours in the framing department. OK. So maybe it wasn't several hours, but after ten minutes of Maximus telling the framing person "Oh, I just don't know about this. Can I see that one again? What do you think?", I was ready to head to the tool section for an exacto knife to slit my wrists. 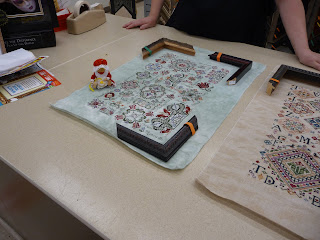 We returned home in time to give the little dog his medicine and then watch him stumble around before falling into a nice deep nap. He sprained his neck this week, and after a few (well several, actually) frantic trips to the vet, he was prescribed pain meds, an anti-inflammatory, and the order of bed rest. He does, however, seem to cope well with this, since his little fort is stocked with cable, an iPad, and all the tea and peanut butter toast he could ask for. When I went in to check on him earlier, I noticed that he also sports some 900-count Egyptian cotton sheets, so methinks the Spinster should rethink the 200-count set that she's got in the guest room.

So I'm ready to travel, folks, and cannot wait to find out what my next destination will be. I understand that there will be a ceremonial choosing from the magic can of destiny later this afternoon. If I understood correctly, it looks like there were over 70 of you willing to take me on.

Thanks for listening. I hope that you've had a pleasant weekend and that we'll see each other again soon!