My mom can't come to the blog right now. She's on the bathroom floor in a crumpled heap, waiting for the Tylenol to kick in. She has just returned from a trip outside to Aunt Chrissy's garden, and based on the amount of blood, sweat, and filth that she's tracked in with her, methinks this is not going to be at all pretty.

OK, let's start on the patio. My daisy looks pretty good. I can see that she watered it thoroughly and trimmed off a few of the wilted blooms. Some of the leaves look a little forlorn, but we are back in the throes of heat and humidity, and this is to be expected: 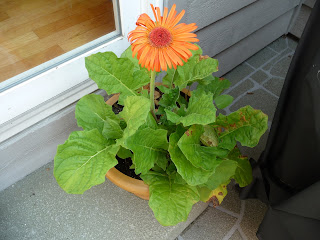 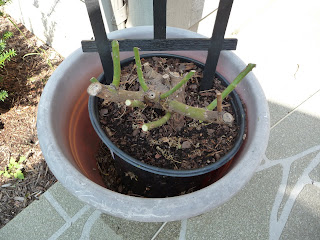 Oh, dear God in heaven! What the hell did she do to this poor thing?! I know that there were a few leaves that looked like they had been eaten by a few little bugs, but Holy Crap Batman (!) this is completely nuts!

Forgive me, as I put my paws over my eyes as we head to the garden. Just last night I inspected it carefully and noted that the tomato plants were about eight feet high and the three cucumber plants were a solid mass of leaves, cucumbers, and vines. The peppers were a little stunted in their growth, but I don't like peppers anyways and could care less if we get a good crop or not. 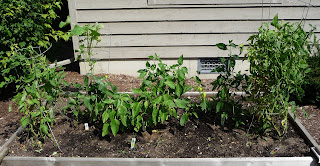 OH NOOOOOOOOOO!!!!!!!!! Who gave this woman a hack saw! How did she sneak out without me hearing her ankle bracelet going off!? Why were sharp garden implements within her reach? What the hell am I going to tell my Aunt Chrissy???!!!!!!

I swear, as God is my witness, I am going to throw the old lady in an institution and be done with it. She's simply gone too far this time....taking such liberty with a garden that Aunt Chrissy and I have lovingly tended and watered and cultivated for three months now.

Oh, I'm so freakin' mad I could spit my Puppy Chow all over the place. Why couldn't I have been adopted by a NORMAL person and not some nut bag who thinks it's perfectly normal to go outside in a crazy get-up shouting "Christina!! Bring me the ax" while the neighbors secretly dial the police.

I'm completely stumped. I really am. The only thing I can think is that somehow Mom got it into her head that trimming the garden back to within an inch of its life would somehow make it grow better and that she would be able to harvest tomatoes the size of baseballs by Thursday. I guess the intention is good....after all, she has done NOTHING to help us with the garden this year. But did she have to go so completely PSYCHO?


Changing topics, I thought I would show you a pic of the stitchy project Mom's been working on. I personally think it's very lovely and that it will look smashing in the living room once it is completed and framed. Mom seems to really enjoy stitching it, and all I know is anything that can keep the old lady quiet and out of jail for more than fifteen minutes gets my vote every time. 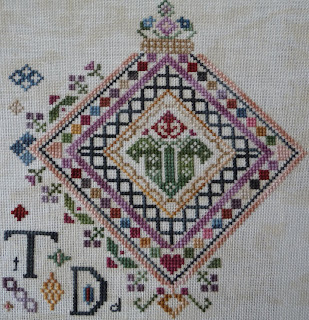 Life here at Chez Spinster is quiet and happily awaiting Autumn's arrival. I've sent all of my cool weather gear off the the laundress so that when the first cold day arrives I'll be all set with my Snuggie and a cuppa' tea. I'm auditioning various flavors, but it seems that I am becoming partial to Earl Grey. That and a little cookie at 3pm each day and I'm fortified for whatever comes my way.

Except, maybe, crazypants spinsters armed with garden tools and a bad attitude.

I hope that life is swell in your little corner of the world!