My mom can't come to the blog right now. She's stomping around the house with a roll of paper towels and Pine-Sol. Apparently, she was none too pleased when she saw the puddle I left for her this morning on the newly cleaned bathroom floor. (That'll teach her to ignore me the whole damn day while reading stitchy blogs on the internets.)

In any event, our morning has gotten off to a rough start. You see, we are experiencing a coyote problem over here at Chez Spinster, and this little development has thrown Mom into some sort of terrible fit. Instead of opening the back patio door to let me out for a little pee-time privacy, she now insists on accompanying me out to the yard while armed with a flash light and snow shovel.

Mom spotted one about ten feet from the back patio last week and when she alerted the neighbors about it, the responses she got were rather astounding....

"Oh yeah, there's a big pack of them living behind my house and I hear them howling every night."

"No big deal. I just put a little food and water out for them each evening and they seem to really like it."

"Coyote? Have you taken to drinking in the afternoon, you Crazy Spinster Lady?"

Mom did lots of research (being the good mom that she is....ahem), and she discovered that coyotes are not, in fact, no big deal, but rather dangerous wild animals that will eat me for a snack before you can say "Why is that crazy lady wearing a black hat with a veil and digging herself a grave in the backyard?". Apparently, when there's more than one of them, coyotes become rather aggressive and will attack anything they damn well feel like. Yikes.

So all of this potty supervision has completely thrown me off my game, particularly since I prefer a little privacy while making my deposits and my stupid mo-ther won't let me out of her sight. I'd creep around the side of the house where it's all dark and such, but I think this would send her directly to Panic Attack Central, and nobody needs to see that.

I did manage to stop her dead in her tracks though, since she is apparently incapable of carrying on a conversation and wipe up dog pee at the same time:

MTHR: Damnit, Stewey! I swear, if you pee on one more thing around here I'm going to put a clothes pin on your peenie and slap a set of Rumba Panties on you!!!!

ME: Rumba Panties!!!!! But those are for girls! (NOTE: Please go immediately to Mr. Edgar's blog to learn all about Rumba Panties: http://blacksheepsite.blogspot.com/.

MTHR: Well, Mommie just doesn't know what to do with you anymore. You're a big boy now and should NOT be peeing in the house!

MTHR: What are you talking about? Bees don't pee!

ME: They most certainly do, as is evidenced by Ms. Martha Stewart Her Very Self on her blog this morning.

MTHR: ????????? What were you doing on the computer without permission?

ME: Don't change the subject. Bees pee and you should know that I feel that if a bee can pee than so can I. This will conclude our discussion of this particular topic. Now please go make my breakfast while I go blog about what a boob you're being.

MTHR: You're grounded. Go to bed.

MTHR: (She stands...staring blankly...obviously defeated and without any recourse other than a retreat to the bed to pull the covers over her head.)

So as you can see, I dodged that bullet (at least for the time being, anyway). But I was indeed very serious about bee pee. See? 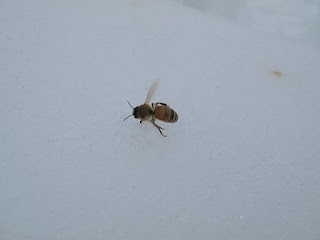 And here's his pee: 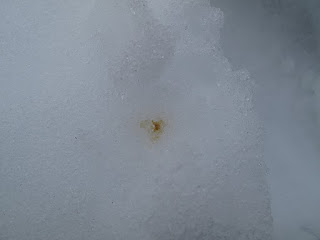 If you don't believe me, go to Martha's blog and you can read a fascinating account of her very own bees at Canticoe Farms.

Mom promises that she will have something stitchy to say. I'll poke her with a stick this afternoon to see if she'll get up and take some crappy pictures to share. She has been working on Rainforest Crunch, but I'll let her take the pic. I'm not allowed to use the camera ever since I got caught sexting.

Have a lovely day, all!
With love from your pal,
Stewey
Posted by Coni