On Friday I got the hankering to do some cooking. So I sat down with all of my Ina cookbooks and planned out the making of at least six hundred different tasty dishes and then decided to attempt Olive Garden pasta fagioli.

So on Saturday, Aunt Chrissy and I headed to the mega-mart, along with the rest of the state of Indiana. What does it say about a place that when the sun shines during the month of January, you would think it was the apocalypse the way everybody comes out and drives their cars as if a trip to the Home Depot would save the world? So it would seem that everybody decided to go to the grocery store at the exact same moment I did, and those everybodies got the hell in my way until Aunt Chrissy made me do breathing exercises in the soup aisle.

(For the record, I did NOT throttle the Granger housewife who knocked me out of my L.L Beans, rummaged through the chicken broth cans for an hour and then looked up and me and said "Do you need to get in here?").

(And, for the record, I did NOT get my New Jersey on and say to her "Whadda YOU think?!").

Instead, I stood behind her and glared so hard that I gave myself a headache. The foreign exchange student that was unlucky enough to be with this brawd gripped their cart in utter terror.

So much for making a nice impression on our national visitors.

Pasta fagioli, it turns out is remarkably simple to make. The version I came up with started with the Holy Trinity....celery, carrots, and onions, followed by some garlic at the last minute. (Ina says that if you put it in all together it will burn and become bitter, so I do as I'm told and add it at the last minute.) Then I dumped beef broth, diced tomatoes, tomato juice, chicken broth, red beans, white beans, nicely browned ground beef, and some spices.

Aunt Chrissy can't take spicy, so I sighed heavily and made it nice and bland for her with the understanding that I could add with impunity my own chili powder and cayenne pepper later.

This simmered for about three hours, and just as we were getting hungry, I boiled these little itty bitty ditali pastas and added them to the pot. Well....um.....I thought they were itty bitty, but the result was an increase in volume that was...um...rather unexpected: 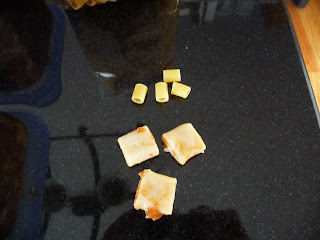 Who knew that ditali pasta morphs into something ten times larger than what any normal person would expect?

Needless to say, I containerized TEN big quarts of the stuff and sent Aunt Chrissy home with four of them. I kept six in the fridge for dinners this week: 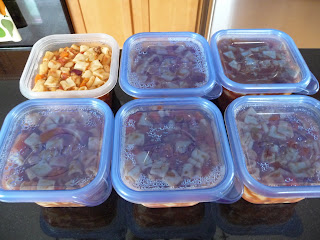 Oh, and did I mention that I didn't really even like this stuff? (Sometimes it's not easy being me.)

We had StudioPalooza in addition to our PastaFalooza, so I did manage to finish my very first ornament: 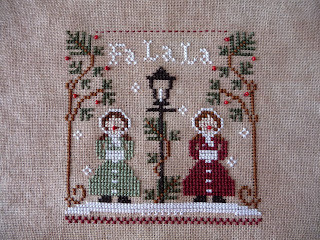 I'm still not convinced that this thing will actually fit on a Christmas tree, but I won't make the final judgement until I get to the finish-finishing stage. I suppose that if it's too big I could make it into a stand-up or a pillow or something, but I'm not going to get twisted about it until the time comes. Stay tuned for some heavy glue gun action.

I tried and tried to kit up a new canvas piece last night, but I kept getting frustrated and jumbled over color selections. Aunt Chrissy peered at me a few times over her stitchy glasses to ask what was wrong, so in the end I decided to put it all away and stick a few stitches into the big red sunflower. Maybe I'll play with that one for a while to see how far I can get.

That's the Monday report from Chez Spinster, dearies! Cioa and cheerioes to all!
Posted by Coni