Did you ever stitch your eyeballs out for four straight days and then look at your progress and say to yourself...."THAT'S IT!? THAT'S WHAT I ACCOMPLISHED AFTER FOUR STRAIGHT DAYS OF STITCHING MY EYEBALLS OUT???!!!" ?

On Thursday afternoon I decided that I really wanted to finish something for year's end so that I could wake up on January 1st with a brand new start. On January 1st, I woke up and said "Phooey. I'll just go ahead finish what I was working on yesterday and we'll all pretend that 2010 actually starts on Monday."

So I stitched my eyeballs out all day and FINALLY put the last little tent stitch into: 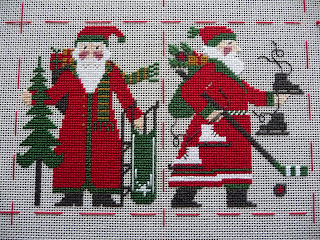 The little guy on the left is the 2008 Prairie Schooler annual Santa. (2009 is on the right.) Please excuse the red lines...they're just there to give me an idea of where the borders of each block are. I'm not positive, but methinks I will do some kind of fancy schmancy border around all of them once they're done...maybe in a nice variegated Watercolours, like Holiday?

After the ceremonial Happy Dance was completed, I fished around in my basket and came up with the perfect project for a snowy afternoon: 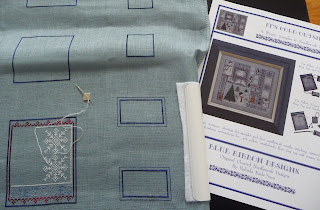 This is Blue Ribbon Design's "It's Cold Outside". I decided to stitch all of the smalls on one big piece of linen and then do the sampler on another piece. I'm pretty sure that I stitched borders/outlines for a week and a half. I'm all done with borders/outlines now. Forever. (I think this is what made me wonder just what the heck I had been doing for so long since it seemed so... "eh" when I looked at the sum total of it.)

I'm not going to get discouraged, though, and think I'll keep plowing through until all of the smalls are stitched. Then I'm pretty sure that I'm going to switch to something else so that this one doesn't end up out in the driveway with me cheering Stewey on to back over it with the car.

The snow keeps piling up and Stewey has been standing at the back door for an hour now wondering when I'm going to clear him a little path so that he can go out to make a proper deposit. I heard him mutter something about the drapes a few minutes ago, so I suppose I had better hop to it. And soon. Damn dog.