WELL THERE'S A SUNDAY AFTERNOON I'LL NEVER GET BACK

Ahhhh, the best laid plans of stitchers and spinsters.

On Saturday I sat in the Happy Chair and stitched away on Idaho Star while watching Notre Dame lose to Navy and Aunt Chrissy have a nervous breakdown over some of the play calling: "You go for it on 4th and 20 when you're backed up into your own end zone???!!!! What the hell are you thinking, coach??!"

And then, when Navy got a safety (at least I think that's what it's called....I'm not a football fan, I just play one on TeeVee), Aunt Chrissy bolted out of her recliner and said "SEE!?? That's the game right there!!!! Notre Dame is going to lose by TWO FREAKIN' POINTS!!!!". There was also a lot of blathering about "converting in the red zone" but I was in a heavy Zen-like LJP Vineyard Silk kind of mode so I just nodded my head like I knew what she was talking about and kept stitching.

(Times like that make me wish I had a bookie, especially since Notre Dame DID lose to Navy by two points.)

By the time the game ended, I had completed almost all of the inner portions of the design, so I figured I'd move on to the background and possibly (!) complete this one on Sunday.

(This, of course, is exactly NOT what I had originally planned to do on Sunday. I decided that I would start my Christmas canvases on Sundays and see if I couldn't get one or two of them done in time for the holiday.)

When I sat down to stitch I took one look at my background colors and wondered what I had been drinking when I selected them. Totally wrong in every way.

When I came home I sat and stared at this for another few hours and then I started to poke around in the nether regions of the studio for something...anything(!) that would work.

I finally decided on a set of three Impressions and tried it out as the clock struck 2am. Bleary eyed and defeated, I tucked Stewey in and said my goodnights.

In the light of day, I think it MIGHT work, but I won't be convinced until I hit my LNS tomorrow to paw through threads there. I keep thinking that there might be a Vineyard silk that will be a perfect match and all will be well, but I have a full twenty-four hours to wait until that can be confirmed. This will most certainly be a test of my temperament. Will I be able to just put this one away for a day and work on something else? Or will my ridiculously compulsive stitchy behavior cause me to pack provisions and camp out in the shopping center parking lot? 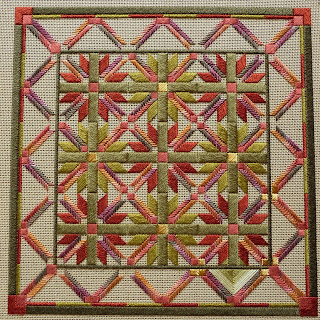