****WARNING****
Your computer might blow up trying to open all of the pictures in this post. If that happens, feel free to curse at me and my stupid need to tell everybody everything I know. Oh, and please feel free to delete me from your Palm Pilot. (That line is from an episode of Sex and The City, but the exact context escapes me at the moment.)

Is it just me, or could it possibly be true that everybody and their uncle seems to be rushing the season this year. (Please note: By "everybody", I don't mean US...you know, the ones who have started to decorate, bake, shop, etc. I mean THEM...the retailers who have started broadcasting their Christmas commercials in the hopes that we will forget about the economy and go buy lots of stuff from them before December 1st so that they can tell CNBC that the projections for this year are STUPENDOUS! and that they still have lots of good deals available for that last minute "twenty-five days before Christmas" rush.)

Like a good little stitcher, I worked on WIP's for SEVENTEEN WHOLE YEARS without a break until November 1st. Then, I told myself, it would be OK to start new things. And, since I seem to love the colors of Autumn so much, I figured I'd do some autumnal stitching during the month of November, and maybe start Christmas the weekend after Thanksgiving. (An idea that I shamelessly stole from Aunt Chrissy.)

But like all of my plans, this one went awry as soon as my head hit the pillow last night and I started to think about the big ass Christmas Stitching basket that was lurking just above my head up in the studio.

When I went through the Christmas Stitching basket several weeks ago (in preparation only, I promise), I discovered that I only had three or four projects in progress for Christmas. Whaaa? Could it be? What the...?

Yes, for some strange reason I had either completed a lot of Christmas stitching last year, or I didn't do that much to begin with. But....I digress.

"Finishing these projects will be a breeze!" I thought, as I pondered which new basket to use. "I'll just finish these first and will then jump right in to a canvas or counted canvas piece and that way I will have finished several lovely pieces in time for the holiday."

So I checked out my progress from last year: 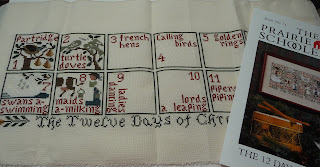 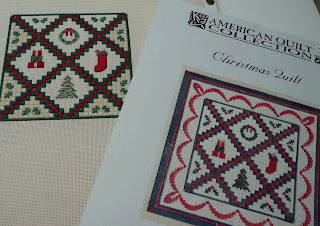 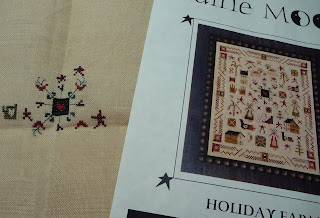 I have to say, I was pretty pleased with myself that there were only these FEW pieces to be considered, and I immediately set about the task of patting myself on the back. (Not an easy thing to do when you're one corned beef sandwich away from being a circus freak, I might add.)

Sadly, this was right about the same time that I remembered that I am taking the Raymond Crawford Merry Christmas canvas class from Ruth at Bedecked and Beadazzled, and TWO lessons have already been taught! CRAP! I'm already behind schedule with a project that wasn't even in the damn basket to begin with! 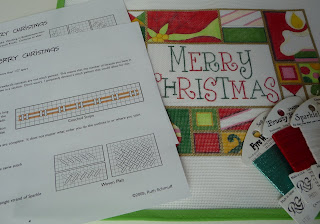 Then I spied another canvas from Maggie that I've been trying to do for the last four years. I just can't seem to come up with the right threads or stitches for this one, but I'm determined to use this as a "learning piece" for myself and see if I can't just figure out how to embellish painted canvases after all. 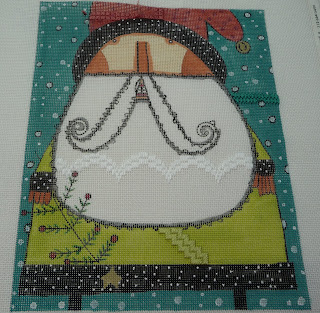 (Cue the forehead slap and a big fat STOOOOPID coming out of my mouth.)

There's the Mirabilia Santa that takes my breath away, but has a chart that looks like it could construct the International Space Station. 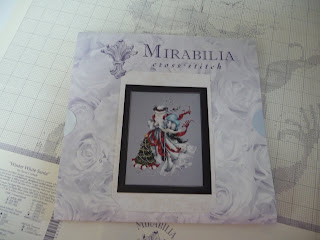 There's the Birds of a Feather stockings that look sooooo funky and cool, but will probably NEVER realize their full potential since I wasn't smart enough to buy a piece of linen big enough to do them all and now it's no longer being made. 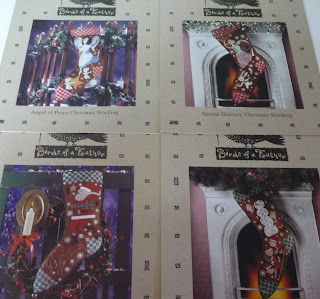 There's the Prairie Moon Collector's Edition Santas that I am determined to stitch in UNIFORM colors and linens (even though the kits come with different color palettes...see last year's "Matchy Matchy" post for angst over THAT situation.) 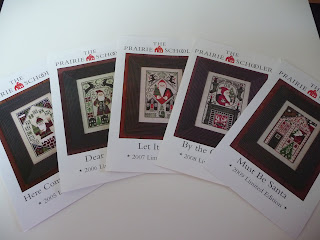 And then there's the Prairie Moon Christmas Eve that makes me want to go sit in a chair some place and not get up until this is kitted, stitched, framed, and hung over the fireplace. 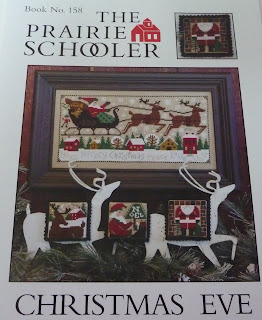 And then, just to make it all worse, was the discovery of some Pat Thode Santas:

And this ADORABLE little Squatty Stitching Santa from Ruth Schmuff: 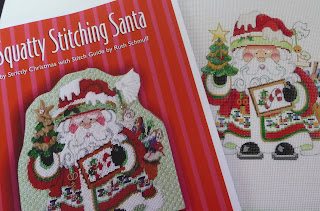 I would have gone further, but the resulting anxiety was just too much for one spinster to bear. I sat on the floor for a few minutes and decided not to be sad over all of this mess, but rather to REJOICE AND BE GLAD! that I have such a lovely pile of things from which to choose. I decided not to panic over the number of hours it would take to stitch these things, but rather to CELEBRATE the fact that this stuff will surely keep me off the streets for at LEAST another ten to fifteen years. Why view this as a negative? Why not think of it as...

Oh, who the hell am I kidding? Y'all know me well enough by now to know that I'll chew on this for the next two months and then I'll find something else to fret over. It's my process. Leave it alone. (Yet another line from a movie, I think.)

So that, my dear stitchy friends is the state of the Spinster Stitcher Stitchy Union at this very moment in time. Aunt Chrissy promises to pick me up after work for a trip to the Target pharmacy, so never fear...medications are near!!!

Have a wonderful Thursday! I'm off to the mailbox to retreive my new Notre Dame Alumni Directory. I hereby promise not to look up my old classmates to see that they've published their eighteenth novel (thanks a lot, Nicholas Sparks) or solved the Middle East peace situation, or cured some mysterious disease in a forgotten country. I'll just wish them well and think of them fondly.