This silly machine and I are engaged in a battle of wits. If you've been reading this here blog for more than fifteen minutes, then you know exactly who is winning said battle, but my pea-sized intellect is another subject for another day.

I think what is most troubling about this damn computer is that it DOES STUFF. And, more importantly, it DOES STUFF that I don't want it to and it DOES THIS STUFF while I am sleeping and seemingly minding my own business.

Each morning is an adventure in discovery as I try to figure out what fresh hell will be delivered to my screen. I spend the better part of a week getting everything just so...all of the bookmarks and blog pages and other crap in the exact spot I want them, and POOF!, I awaken to find out that my computer thinks they would be better another way.

Case in point....a few months ago the computer decided that I needed to have Internet Explorer 8.0. I don't want 8.0. I have 7.0 and I like it very much, thank you. But somehow I awoke to discover that 8.0 had been downloaded and installed while I was off doing something important (like solving world peace or finding my laying tool for instance).

So I un-installed 8.0 and managed to tell the nice man on the phone that if my computer wanted to be an 8.0 so badly, then it could just get in the car and drive itself back to BestBuy and be done with it. I want 7.0. (The man was completely unsympathetic, by the way, and I don't think the fact that he actually works for the Mishawaka Utility company (and not the computer company) helped matters. At all.

Today was another morning fraught with angst and a lot of hair pulling as I clicked onto my "very important work to do" page (that would be the stitchy blog reading page), only to find out that we are, once again, back in Installed and Downloaded Hellville.

Now before you are kind enough to tell me how to fix everything, please know that I have the Geek Squad on standby, and if I don't end up throwing this thing out into the front yard, they will be here (free of charge, by the way), to fix what ails me.

I think this is why I love stitching so much. If I look at something I've done and it's hideous, the only words I hear from the linen/canvas are: "You put the stitches in that way, dumb ass." So then as I'm ripping out my mistakes I have nobody to blame but myself. With this situation, however, this computer does what it pleases/when it pleases and doesn't have the common decency to ask first. It sits in its armoire and says "No, we're going to do it MY way because only I know what's good for you and you'll learn to like it. Or else."

When Aunt Chrissy and I visited Target this week we walked through the electronic section because I wanted to see what all the fuss was about over these new flat screen/bigger than a drive-in movescreen TeeVees. My current TeeVee is about twelve years old, and I'm pretty sure that it was obsolete a full ten minutes after I bought it, but I can faintly make out people's faces on it and it's good enough for me.

Or so I thought.

As Aunt Chrissy and I stood in front of the display wall of 42 and 50 inch flat screen HDTV plasma TeeVees, we gaped in awe at everything we'd been missing. The colors! The details! The sparkle and shine! We stood there for a full twenty minutes clutching hands while the wonder of it all washed over us. I suppose it was somewhat like the reaction that most people have when they see the Grand Canyon for the first time...your eyes struggle to adjust as you step from black and white into technicolor and the little munchkins giggle in the flowers all around you.

I suppose that this experience should have convinced me that not all technology is bad, but unless things start to shape up in the Spinster Stitcher Computer Department, we're going back to legal pads and Bic pens. Period.

I will win this battle. I will beat this computer into submission and force it to do what I want it to do WHEN I want it to do it. I will teach it to ASK me if I want something new and I will even teach it NOT to do things in the middle of the night while it thinks I'm sleeping.

In the meantime, stitching will continue, Stewey will pee, and all will be right with the world once again. Here's what I stitched last night (and yes, it was while watching my crappy little four inch TeeVee without and H, D, or TV involved): 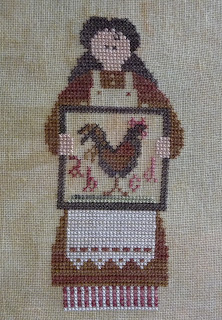