It's a good thing I'm not responsible for the overall maintenance of Chez Spinster, because I've spent the better part of a week in the Happy Chair doing absolutely nothing. Each morning I woke up with a very comprehensive list of the tasks that were on hand for the day, but somehow I ended up in the big girl bike shorts and seventeen year old t-shirt with nothing but a nap on the brain.

What can I say? I'm just not a hot and humid kind of girl.

Stewey took the camera outside to gather evidence for our weekly "Mother, this place is going to hell in a handbasket" meeting, and I must say that I was duly impressed with his photographic capabilities. I was told, however, that if I don't get out there bright and early tomorrow morning to do some serious dead-heading and weeding that there will be tiny little puppy paw hell to pay.

First up is a hibiscus that is finally blooming. It's twin has been a little more shy this year, so methinks we need to do some coaxing/watering/threatening this weekend: 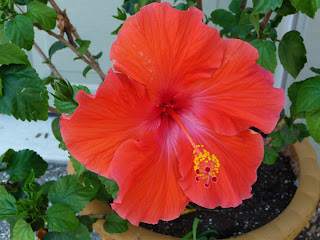 The front path to the door is getting a little crowded by the lilies on the left and the lavender on the right. I guess it's time to think about clippings for some sachets? 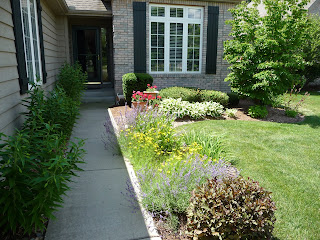 Speaking of those lilies, if the number of buds on this one are any indication of what's to come, methinks I should start making big-ass funeral arrangements. Or prom corsages. 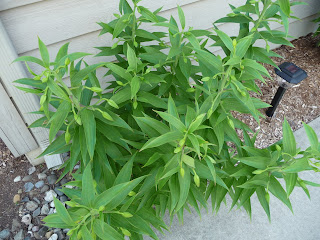 I see he stopped to do a little watering (please disregard the woefully neglected geraniums...I'll fix 'em tomorrow. I promise.): 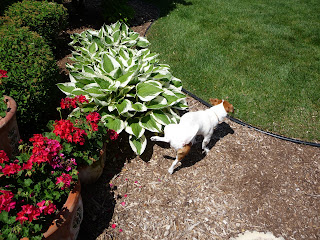 And finally, it looks like Aunt Chrissy and I just might have farm fresh summer salads after all: 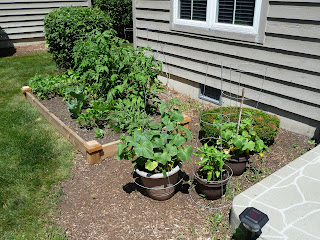 Holey schmoley, I can see that I have a TON of weeding to do. I hope I remember to put sunblock on my dowager's hump, or there is sure to be some sun-burnin' goin' on.

Last evening I did manage to do some stitching while watching the Michael Jackson "He's only been dead for six minutes but we're going to roll this retrospective and talk about the legal consequences of his estate" coverage. I am gobsmacked by the speed at which news travels these days, and how we're not happy unless we're getting the most up to date and latest coverage. Of everything on the planet. I suppose that when I die, I hope that the media give Aunt Chrissy a minute to fix her lipstick before they inundate her with questions about my legacy and the impact my death will have on spinsters everywhere. Sheesh.

(Now before you think I am being disrespectful to Mr. Jackson, please note that I would never deign to to so. His music was the soundtrack of my life from the age of seven until the afternoon I graduated from college. So there.)

(I also don't want to forget the fact that another person in the public eye lost their battle with that bastard-that-must-be-eradicated-if-it's-the-last-thing-we-do disease. Rest in peace, Ms. Fawcett. You gave a very brave face to a very ugly reality, and you reminded us that cancer just sucks.)

Here's Bent Creek's "Big Zipper", as stitched on 32ct. Legacy linen (the idea that was shamelessly stolen from Miss Margie of "Two Cool Pugs and Me" fame): 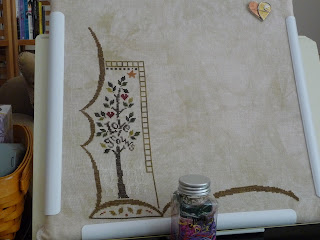 That's the report for today. I've heard that the temps and humidity will be down by Monday, so maybe I'll take that as a sign that my stay here at the VeggieTate Inn is coming to a close.
Damn.