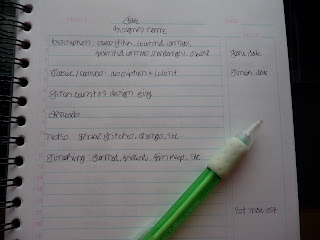 If you thought I was completely nuts before, this post will confirm it for you. I spent the better part of the weekend organizing stitching up in the studio. Yep. You read that right. Organizing. Again. For the six thousandth time. (Go ahead. I'll give you all a moment to snicker and snark amongst yourselves at what a crazy whackadoo I am.) OK, feel better now?

I prefer to think of my semi-daily organizing tantrums as "inspiration gathering". Kind of like doing research before writing a book. I figure if Doris Kearns Goodwin can take eight years to research one of her books, then I am certainly entitled to a few OCD hours up in the studio, pawing through my stash.

What can I say? I am just in love with the idea of sitting down with canvases and charts and linens and threads and playing with them all day. When I was a kid, it was Barbie. Now, it's stitchy stash. I can put things in piles or throw them in heaps and I can not clean it up for a day or two and not feel at all guilty about it. It's just the most relaxing way I can think of to spend an afternoon. If I'm not shopping for stash or organizing stash, then I'm thinking about stash, so I might as well just admit I have a problem and move on.

One of the organizing areas that I've just never seemed to tackle was writing stuff down. My sister, the illustrious Aunt Chrissy, has several stitchy notebooks that she is very faithful to. She updates them, consults them, and even carries them with her when we stash shop. (Yes, it runs in the family, so wipe that look off of your face.) I think she has been keeping these notebooks since she's been stitching, which would be about 22 years, but I can't seem to find any of the old ones when I go over and snoop through her house.

Oooops. I mean, I don't see any of her old notebooks laying around when I go over to play with my PuppyTot Nephew Bosco. (Whew! That was a close one!)

Well, on Saturday I decided to start a notebook of my own and I decided to stop making it so damn complicated. Instead of trying to re-create the wheel, I decided to just write down what the heck I'm working on so that I will know if I made any thread changes or stitch changes, or what linen I used. I also figured it would be nice to put down a start and finish date, and then I got really jiggy with it and decided to put a space for an estimated cost. (I'll probably frog that last category. Sometimes I just don't want to know what I spent on silks or linen for a project.) I also have a daily journal that tells me what I stitched on a particular day, but I seem to be using that more and more as a "what I watched on TeeVee" book or a "how many times did I want to smack Stewey today" kind of thing. Since I am already telling the whole wide world what I'm stitching every day, I might just get rid of that one or decide to donate it to the National Archives. (That would be the kind of thing that would be critical to documenting American history wouldn't it?

Progress on "Beyond My Heart" continues: 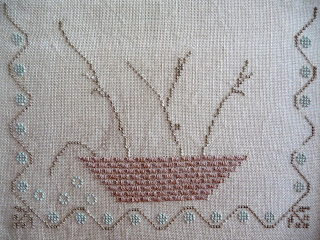 I finished the basket and the stems. It's all flowers and letters from here! I really enjoyed stitching the basket. It's a combination of eyelets and satin stitches and the effect is really pretty: 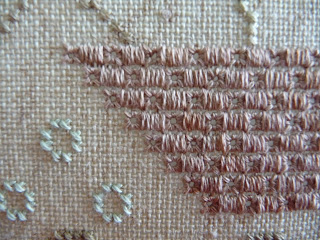 Considering that we are in the midst of yet another snow squall today, methinks I might actually have several hours of time on this one in the Happy Chair today. I'm still really loving the linen (30ct. Gardener's Blend from R&R), so I guess I should be happy that those linen horizons stayed open.

I see from the last post that Stewey was on the computer Friday telling you all of my secrets. Geeze, Louise. I make ONE mention of his wienie penis issues and he has to get retribution. Damn dog. Suffice it to say there will be some serious "discussing" tonight about boundaries and personal issues on the computer. If I can figure it out, I might even put some kind of parental block on here. Knowing my proficiency with this silly machine, however, I wouldn't hold my breath if I were you.

Thanks for stopping by, kids! I am, as always, astounded that you would actually like reading my drivel. Y'all should get some kind of medal or something. Maybe a cookie? Or a milkshake? Oh! I know! A big fat steaming cup of coffee with a perfect little biscotti!

STEWEY! PUT THE POT ON!
Posted by Coni