METHINKS I'M NOT A MORNING PERSON

I had an early-ish dentist's appointment today. OK, maybe 10am isn't exactly early, but I was up rather late and had a hard time getting out of the big girl sleigh bed this morning.

Anywhoose....I puttered about and had my coffee and then realized that I had to rush if I was going to make it on time. (I do SO hate to be late.) I managed to make it with minutes to spare, got my new filling on the root canal tooth and was on my merry way. Woo Hoo for me!

When I came home to change into my "inside the house" wear, I suddenly realized why God made some people morning people and some people not so much (heavy sigh): 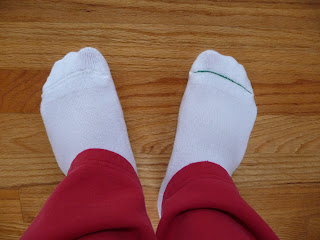 Aunt Chrissy and Bosco came over on Friday night for Chinese food. We spent a fair amount of time up in the studio and I managed to get more organizing done. I swear that somebody is coming into my house in the middle of the night and rifling through my stuff. I mean, it was all tidy a minute ago and suddenly it's a mess again. Must be the same person who keeps piling up the laundry. Wonder if I should install a nanny cam?

I started Laura J. Perin's "Daisy Collage" and am loving every minute of it. It doesn't look like much now, but once I get into those boxes and start filling them in it will be wonderful! 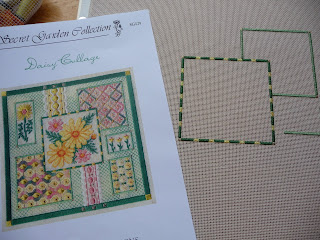 We stopped at Needle Nest on Saturday to pick up a thread or two, and Chrissy inspired me to also stitch LJP's "This Heart's For You"...a freebie on her website. At first I thought I would do this on red canvas with white threads, but after I played around a little bit, I decided to do the FIRST one in pinky-reds and pinks on sparkly white canvas. I'm sure that I'll probably do this one more than once, so that red canvas won't go to waste. 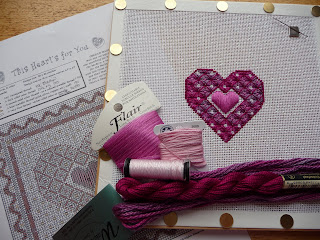 I have been so inspired by all of the rotations out there, and am thinking about getting back into mine, but with some changes. I love the idea of doing a particular project on a particular day, but I was wondering what would happen if I decided to do a particular type of stitching on a particular day? For example, Monday could be cross stitch, Tuesday painted canvas, Wednesday counted canvas, Thursday crewel, etc. etc. I'm still tweaking, so stay tuned. At the rate I'm going, I will probably just try to get "Strawberry Garden" finished and framed before Spring officially arrives in all her glory.

Hope y'all had a splendid weekend and that the week ahead is full of fun and stitchy goodness for you!