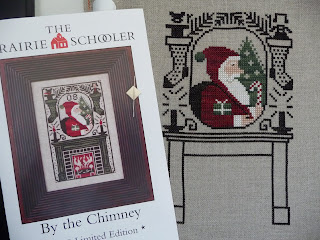 I threw in the towel on the PS "Twelve Days of Christmas" for the weekend and pulled this instead. It is a limited edition kit from Prairie Schooler called "By the Chimney". Not too shabby on the progress, eh?

The only thing that is throwing me at the moment is the color selection. I'm all for the red and green thing during this time of the year, but would it BE so wrong for me to make the mantelpiece brown, the candle flames bright yellow, and the stockings something other than green? I can't decide if that will look nice, or if I should stick with the palette as selected by PS. Decisions, decisions.

Stewey and I finished watching "The Sopranos" late Saturday night and we were both very sad about this. When the credits rolled on the final episode, Stewey turned to me and said "What the f***?" in his best Tony accent and trotted off to his little bed. This morning I caught him out at the bird feeder trying to extort protection money from the cardinals. Methinks he's still too little to be watching such an adult program. (Good thing I never had kids.....they would probably all be behind bars by now.)
Posted by Coni