THE STITCHIN SPINSTER SISTERS' HALLOWEEN (AND THEIR LITTLE DOGS TOO)

It all started innocently enough....I awoke to a crisp Fall morning full of anticipation. After coffee and the paper I channelled my inner Ina and made a delicious roasted vegetable soup: 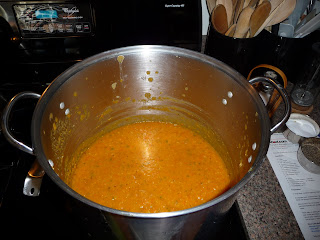 At 4 o'clock on the dot Stewey and I arrived at Aunt Chrissy's with our Halloween costumes in tow and Mommie's camera at the ready. There was some tizzy-fitting going on in the car seat as we drove the 7/10 of a mile to Aunt Chrissy's, and I quickly determined what the problem was.

Stewey had decided that his lady bug costume was just too blah for his liking, so he decide to embellish it a little bit: 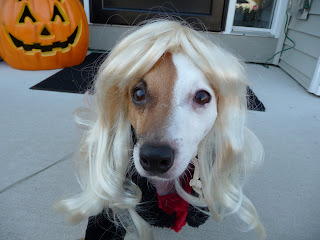 I have absolutely nothing to say about this other than the fact that I've grounded him from Target and taken his credit card away.

Bosco, of course, was a good boy and decided that his pirate costume that HIS Mommy picked out ROCKED!: 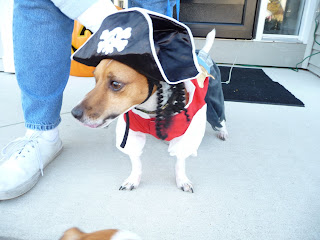 You'll notice that he didn't feel it necessary to do anything other than put his little costume on and go see his buddy Mr. Joe next door.

We had six and a half minutes of pictures and then a lot of bitching and complaining and then we had two pouty, sweaty dogs who felt that the standard treats for the day just sucked. I suppose that we should have thought this one through a little better, but methinks Aunt Chrissy and I were too busy peeing ourselves watching Stewey in his wig.

Back to Chez Spinster for a lovely dinner of soup and sandwiches (see above). Sadly for Aunt Chrissy, the little kick that I decided to add threw her right into a full-blown heartburn attack and she was miserable for the rest of the night. OK. So. Who knew that six full tablespoons of hot Hungarian paprika was just a little TOO much kick?

Up to the studio we went for Craft Night Gone Awry! I had studied a rather cute project on the Martha show earlier in the week and methinks we actually pulled it off this time! The secret was the $10 jar of Martha glitter. Yup. $10. But this woman knows her glitter, let me tell you. It's powder fine and gorgeous (as far as glitter is concerned), and we'll be picking it off our faces for three weeks. Here are the results of our labor: 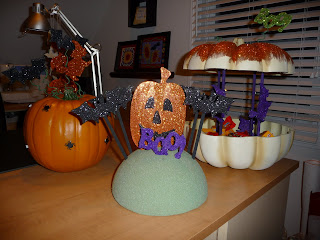 Aunt Chrissy's pumpkin is on the left. Isn't it just the cutest? The black things are glittered spiders and she twisted wire to make the stems. The thing on the right is supposed to be a pumpkin carousel. See the little witches flying around in the center? There is supposed to be black moss in the base of it, but it's still out in the garage "drying" and infesting everything I own with paint fumes. The thing in the center is just a little goofy thing that resulted in me needing something to stick the stuff into to wait for it to dry....cute, eh?

When we finished up for the night we both wondered if we would look at these things in the light of day and be totally embarrassed that two grown-ass women did them and not some sugared-up bunch of kindergartners. Well....in looking at the pics, methinks we'll just tell people that we bought these from a grade school craft sale and be done with it.

I finished my DebBee's Diamond Delights III tonight while watching "All the President's Men" on TCM. I had never seen this movie before (don't know why exactly), but I was riveted! I suppose that it helps that Chrissy and I took advantage of early voting here in Hoosierville today and we went to cast our votes. So here I sit, feeling all patriotic-like. Oh, sorry. Forgot the pic of the finished piece: 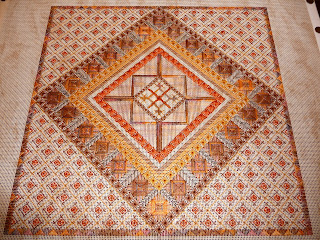 Man 'o manachevitz, but I wish I could take a decent photograph. This things is GORGEOUS, if I do say so myself. In the center of each of the little boxes in the background are pretty autumnal beads. Then, the center has a beaded "X" that I managed to kinda' knot in the middle. If you are looking for a FUN! and autumn-y project to do, this one rocked.

Whew! Sorry for the length of the post tonight, kids. Hope y'all had a splendid weekend! I'm off to the flannel sheets with a warm puppy. And, no. The wig is not allowed.