Woo Hoo for me! The first Happy Dance of the Fall season happened at 11:30 last night, which means I am a whole 30 minutes ahead of schedule. That has NEVER happened to me in my life, so I'd like to take a moment to relish in the delight of actually getting something finished ahead of time.....ahhhhhh.....there. All done now.

This is Laura J. Perin's "Falling Leaves" from her American Quilt series. I used different threads than the chart called for, but the result is pretty good, doncha' think? For the variegated, I used Needle Necessities floss. Everything else is DMC/Anchor #5 perle cotton. I especially like the tone-on-tone border in ecru that looks like repeating leaves. I just love tone-on-tone design. 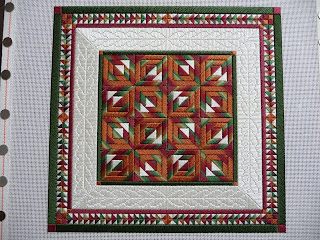 This is a new addition to the Fall basket. Isn't she cute? Her name is Lily Frog and she is a painted canvas/three dimensional from Sew Much Fun. 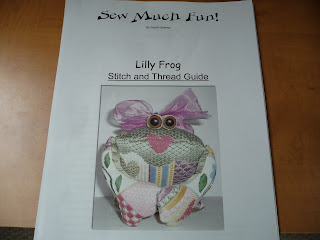 This is so totally NOT my usual style that I just had to have it. I believe that I was influenced by by Stewey's pet toad, Teddy. (I'm serious....since early Spring, we've have a cute little toad living in the front porch plants. One evening I was looking for Stewey and there he was, looking out the front side-light window with his little nose pressed against the glass. On the other side of the glass was a little toad. We named him Teddy and Stewey has to chat with him at least ten times a day or it's pout city around here.)

Speaking of Stewey.....he's unavailable for comment at the moment. Ever since he won the damn Doozie Ball World Championships he's been impossible. I tried to talk with him this morning and he put his little paw up and said "Sorry, you'll have to talk to my agent. I'm not doing press at this time." Hummppphhh. Damn dog outscores me by one lousy little stinkin' point and you'd think he had invented the game. (Actually, he did. But that's another story.)

For those of you who are just dying to know....a Doozie ball is basically a tennis ball on steroids. It measures about eight inches in diameter and is covered in the same yellow fuzzy stuff as a normal tennis ball.


What can I say? Stewey LOVES his balls.

Off to the Happy Chair! Aunt Chrissy and Bosco are coming over for some Labor Day stitching, movie watching, and then steaks on the grill! Woo Hoo!