ONLY CRACKPOTS AND HEROES ARE UP THIS EARLY 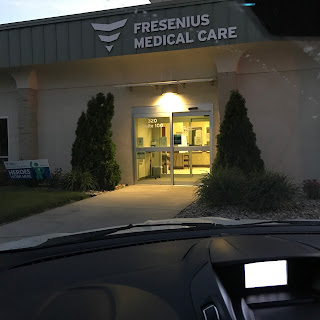 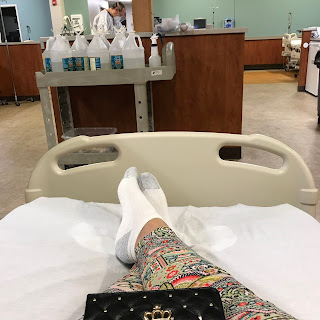 Well, I made it. I was a little worried at first because nobody was here when I arrived, but after patiently waiting a half hour, they finally turned the lights on, opened the door, and ushered me in.

This is where folks come for nocturnal dialysis...7:30pm to 3:30am. Thus, I am ensconced in a bed instead of a chair.

Everything else is the same, though, and Buzzy is behaving very nicely after going so long in between treatments.

I did nicely, too, and somehow managed not to gain any weight. Don't ask me how I did that, especially since one would have predicted at least seven or eight pounds of fluid gain, but I'm not going to get too gloat-y over that, since missing treatment is a very bad thing indeed.

OK...time to settle in and read for a bit, I think. I am about halfway through Sue Monk Kidd's "The Book of Longings" and am still wondering about it. Premise....Jesus has a wife named Ana and this is her story of wanting to be a writer.

My gosh...what would Sister Mary Assumpta say about THAT!!

Thank you for the kind comments about the balcony. My JB is very happy to sit out there each afternoon puffing away and listening to the sports radio or Bruce Springsteen.  I am determined to get out there more often with some damn good and the paper, or maybe even for an occasional dinner al fresco.

Oh...and thank you for putting up with my beastliness lately. I have no excuse, but know that worry, fear, and change is usually a recipe for disaster for me.

Happy.....Tuesday, I think. I hope you will do something fun and come tell me all about it!