AND THEN A LITTLE OF HER DAMN MIND CAME BACK AND SHE LISTENED TO THE VOICES OF HER BETTER ANGELS...

I'm not sure what happend exactly, but after about six hours of futzing, I decided to STOP right there and then, get in the shower, and sit down.
This is either the result of maturity, or some kind of cosmic warning that I was about ready to have a stroke, but either way I am now safely showered and on the couch and determined to ignore the complete chaos around me.
In my entire life I have never given up on something like this half way through.  In days gone by, I would have pushed myself to the point of exhaustion and/or a trip to the Emergency Room, but I suppose this is my new normal now and I should embrace it.
By the way...I'd love to tell you that this all happened because I am wise and prudent, but the truth of the matter is that my body just...gave out. It just decided to quit having the capacity to move. Both my arms and legs just upped and quit...like they had some kind of portly conspiracy against one more minute of working.
But now I am resting comfortably, and I texted JB Magoo to let him know about the day's shenanagins:
ME: I just did something really dumb. It seemed like a good idea at the time, but now I'm not so sure.
MAGOO: What did you eat now?!
ME: No...wasn't anything I ate.
MAGOO: Oh my God! Are you in the hospital?!! Is everything OK??!!
ME: I'm fine. Not in the hospital.
MAGOO: Are you in jail?
ME: Nope.
MAGOO: BoBo...you know I love ya, but even I can't possibly guess what you would consider dumb at this point. What the heck did you do?!
(JB Magoo didn't actually use the word "heck". As a matter of fact, I'm pretty sure JB Magoo has never used the word "heck" in his entire existence on the planet...but this is, after all, a family show and censorship must be deployed when necessary.)
ME: I emptied the entire contents of the cube room studio into the living room, and now I'm trying to put it all back.
MAGOO: (a series of emojis that I can only assume meant I am a complete idiot and should never be left without adult supervision again)
ME: (smiley face, smiley face, little picture of a woman shrugging her shoulders as if to say "wadda ya gonna do?")
MAGOO: Con...you woke up and texted me that you felt like a bus had hit you and that you were going to stay in that freakin chair and stitch today. Why would you do this to yourself when you know you have to get up and go to dialysis tomorrow?!
ME: (lady shrugging again) (*)
MAGOO: What are you doing now?
ME: Sitting on the floor.
MAGOO: ???
ME: Contemplating arson.
MAGOO: Good idea, Con. Good idea.
(*) It's here that I should probably explain that my little people emojis on my phone contraption completely confuse me. I somehow change their ethnicity every time I use them, and they are never caucasian with brown hair...like me. Sometimes I am blonde. Sometimes I am of Asian heritage, Sometimes I'm African American. It drives Magoo nuts, because he feels like he's having a conversation with a United Colours of Benneton ad.
Now the big question comes. Should I make something for dinner or just skip it and have tacos another night? I'm not really hungry, so I suppose an apple later and lots if water might be a better idea than making a mess in the kitchen that I won't be abke to clean up.
Speaking of messes: 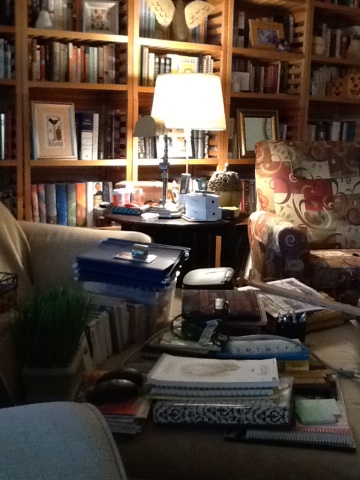 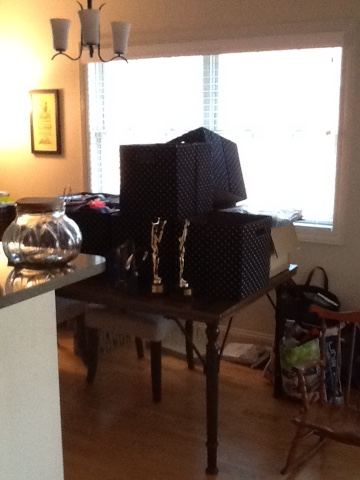 Can you believe I left it like that?!  I swear, it's going to take a sedative to keep me from jumping up tonight and finishing it.
I'll save the reveal for Thursday, which is when I hope to be completed with this little adventure. I promise...next time I get a bright idea in my head like this I'll wait for it to pass!
Hope your Tuesday was swell!  More tomorrow...God willing! 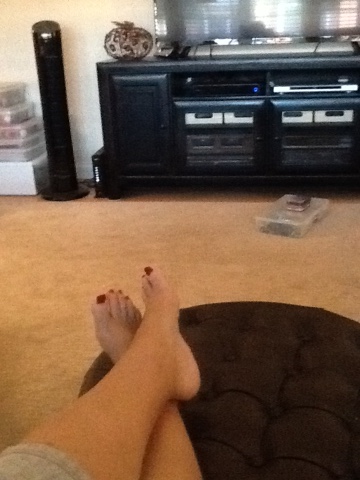