I KNOW IT'S FUTZINGDAY, BUT I WAS FEELING A LITTLE LONELY

So there I was, minding my own business in a dead sleep at 3am when nature called.  This is not unusual for me, especially when you consider that I drink gallons and gallons of fluid all day and don't put the sippy cup down until I finally hit the sheets.  So getting up in the middle of the night to use the facilities is not anything new.

Standing in the doorway hollering bloody murder at the eight foot tall hooligan who had broken in through the back door and was now hulking in a menacing fashion near said back door was, however, quite new.  I screamed loud enough to rattle the windows and blow a vocal cord, and I'm pretty sure that Stewey had a little mini heart attack right there under the covers while wearing his footie pajamas and sleep mask.

OK.  So.  Maybe I should think about putting my glasses on my face when I go to the powder room at 3am.  If I did that, I could avoid mistaking THIS for an eight foot tall hooligan who had broken in through the back door: 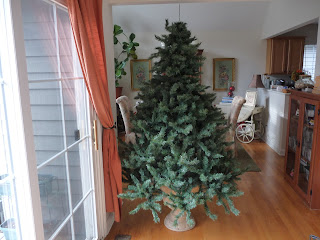 Here.  Look at it from this angle and imagine that a) it's very very dark in the house and b) you can't see more than seven inches in front of your face without your glasses on: 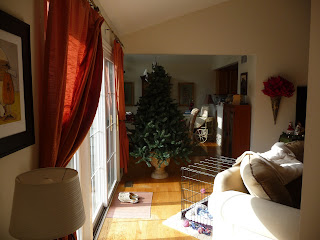 See what I mean?  Hooligan.

I've promised Stewey that I will leave him alone so that he can catch up on his beauty rest.  I had thought that today would be a good day to decorate the hooligan and clean the house, but I'm thinking that a little bun-toasting in front of the fireplace might be better for this particular spinster's frazzled nerves.

I just wish I could twist myself into this shape and still be comfortable enough to fall asleep.  That way I could say that I'm snoozing AND practicing yoga.  Woo Hoo!  Multi-tasking! 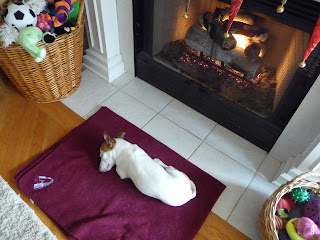