A CHRISTMAS 2011 REPORT, BY MASTER STEWEY ANGUS WILLOWSWAMP, HIS VERY LITTLE SELF

Happy New Year, friends! I hope that you are warm and safe and dry and that you are spending a lovely day in your Happy Chair with a threaded needle and a cup of something satisfying to keep you company.

Here in Hoosierville we're having our first official blizzard of the year, and I am happy to report that all is well due to the sheer brilliance and determination of my Aunt Chrissy. As Mo-ther was stumbling around yesterday in a fog, Aunt Chrissy showed up bright and early and said "Get your shoes on, Tubby! We're going to get those decorations down today!" and out they went.

(Apparently, Aunt Chrissy caught a glimpse of my mo-ther wringing her hands on New Year's Eve as she watched the weather report predicting, as always, an Armageddon like event.)

"Oh, Aunt Chrissy", she whined. "I am so worried about my Christmas decorations outside. How will I ever get them taken down and put away with all of the snow and wind that they are predicting?"

Aunt Chrissy, of course, was completely nonplussed, and muttered something under her breath about not needing to take decorations down in "the home", and then she wondered how fast she could move and not leave a forwarding address and whether or not I would reveal her new super secret location.

(For the record, I would not.)

Anywhoose, the two of them spent a full six minutes unbolting all of the wreaths and such, so when the winds started howling and the snow started flying, there wasn't one single phone call with one single bit of whining whatsoever. Isn't my Aunt Chrissy brilliant that way?

Christmas 2011 has come and gone. Because we had very mild weather and not one speck of white stuff on the ground it did seem a bit odd. But we managed to muddle through quite nicely, and the old lady even capped off the holiday with a spa day and a few little sips of Proseco as the ball dropped in Times Square.

(And yes, in case you were wondering...the spa day was Aunt Chrissy's idea and treat. I am quite happy to report that Mo-ther returned from such with a full twelve inches removed from her hair, some perfectly shaped eyebrows, and festive red polish on her hands and hooves.)

As for me, I will let the pictures tell the story. Commentary, naturally, is from my mo-ther.

Stewey can be a very vicious beastie when it comes to opening presents. And rather than take an organized and civilized approach, he decided that hurling himself into the bag would be more efficient: 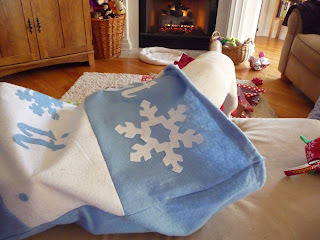 His perfect little cousin Bosco, on the other hand, behaved himself beautifully, and seemed to be more interested in the goings on outside than he was on a greedy grab for Snausages: 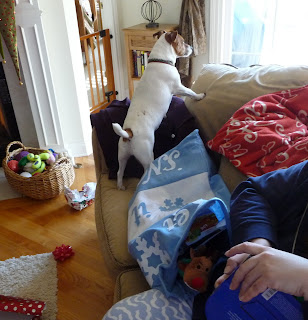 Alas, Stewey finished tearing through his own gift bag, so he decided to convince his Aunt Chrissy to let him have a go at Bosco's: 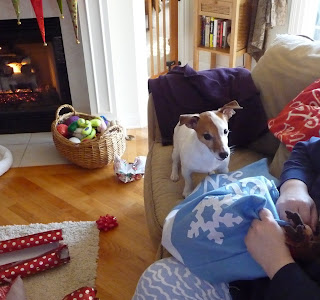 But he lost the argument and appealed to his Mommie Dearest for back-up. 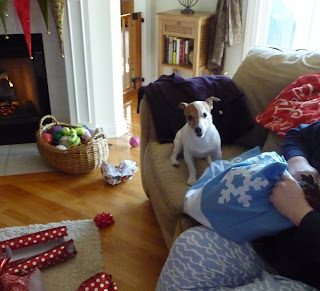 She was, however, ineffectual, as usual.

That's a small glimpse into our holiday, my very dearest stitchy friends. I hope that you and yours had lots of fun and laughter, and that YOUR gift bag was full of great stuff! We're off to the new year! Here we come 2012!

With much love from your pal,
Stewey 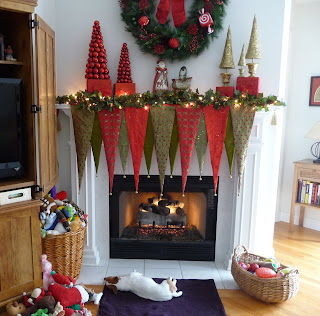