THEY REALLY SHOULD MAKE PILLS FOR THIS

Once upon a time there was a portly, yet lovable spinster who woke up with a headache. She poured her morning coffee, sat down in her Happy Chair, and decided to read the paper.

But then she remembered that she hadn't posted to her blog.

So she fished out her digital camera and took a photograph of her progress on the Daisychain ABC's crewel sampler that she made while watching Wall Street 2 Money Never Sleeps. (Sadly, she did not understand one word of Wall Street 2 Money Never Sleeps, so she promised herself to find a college textbook on financial markets and other related matters and brush up on such so that she wouldn't feel so entirely stupid.) 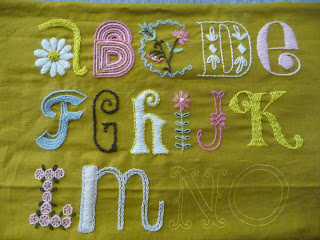 As she was looking for the college textbook, she glanced at her dining room table and felt very very ashamed that it was so messy: 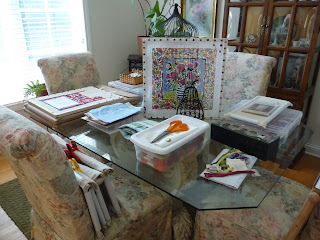 Suddenly, she spied the two Quaker samplers that Aunt Chrissy had framed for her at the Michaels. Feeling even more ashamed (because they were still wrapped in their paper and not hanging on the wall), she went to the bedroom to take a nap. (As this spinster is wont to do when the world gets to be too much.) She spied the two empty hooks on the wall that previously held the big picture that she decided would look much better hanging in the office, but now meant that she had two empty hooks on the wall.

So she went back to the dining room to get the Quakers and she hung them on the hooks: 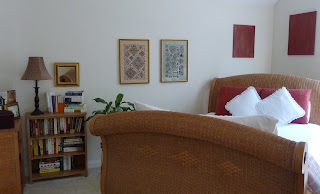 When she came out of the bedroom and walked past the back patio window, she saw her little dog's daisy on the back patio steps. This made her think of the fact that Aunt Chrissy buys this daisy for the little dog each year, and every time she comes to visit, she says "Stewey, let's go look at your daisy" and the little dog and Aunt Chrissy go out to the patio to inspect it to make sure that it is happy and healthy. 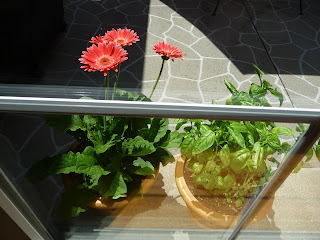 And then the spinster started worrying about her little dog, because his little eyes have been so swollen and sore lately, and even the wonderful Dr. Neiman didn't seem to know what was causing it. So she checked and then double checked his medication list to make sure that she had administered it properly and then stood looking at the little sleeping dog for what seemed like an hour and a half. The little dog slept peacefully, but promised himself that as soon as the spinster wasn't looking he was going to pack his bags and move to Portland. 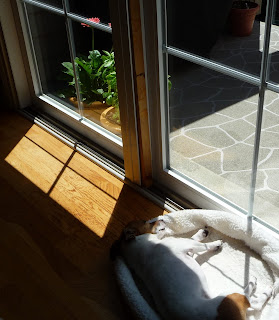