My mom can't come to the blog right now. She's laid up in the Happy Chair with a cold compress on her head and a bottle of Tylenol standing by. She was a flurry of domestic activity over the weekend, and despite my most fervent warnings to pace herself, it would appear that she's overdone it.

Saturday dawned bright and early, and after the old lady wasted an hour and a half trying to figure out the damn Jumble, she strapped on the big girl shoes and tackled the house. She washed and waxed and tidied and polished and straightened for about four and half hours, and I heard her telling Aunt Chrissy that no matter how hard she tries, she can never seem to get the job done in less time than that.

(I, for one, would think that a quick Swiffering every now and then would preclude having to strip, wash, and then wax the damn floors, but what do I know?)

(You'll also be happy to note that there was NO laundering of drapes involved in this little marathon cleaning session, so I CANNOT be held responsible for the wreckage that is my stupid mo-ther today.)

After she clawed her way out of the laundry room, I heard the shower go on, the sweat pants being applied, and then the car zoom out of the driveway for what I assume was a late afternoon dinner with my Aunt Chrissy. All I know is that the old lady came home smelling of french fries and she had a rather glazed look on her face that suggested Famous Daves, Five Guys, or cheesesteak sandwiches.

(Turns out that it was the latter. Apparently a new sub place has gone up down the street, and Mo-ther and Aunt Chrissy were keen to give it a try. No word on whether or not they were any good, but if the stains on the front of the t-shirt are any indication, methinks we have a winner.)

On Sunday I decided to catch up on some movie watching while Mo-ther futzed around in the kitchen. Apparently she was fretting over some left-over beef ribs that just had to be dealt with, because I heard her wondering aloud if birds and deer like bar-be-que. Then I heard chopping and grunting and the slamming of the toaster oven door, and before I knew it, we had this: 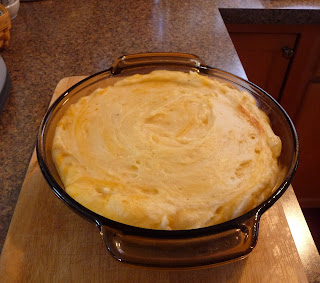 Can you believe it? My mom made a cottage pie all by her very self! She shredded the bar-be-qued beef and then added a bunch of vegetables that had been sauteed in butter and a little olive oil (carrots, parsnips, peas, corn, and shallots, thank you very much). To this she added a lovely topping of creamy cheesy garlic mashed potatoes, and I have to say that the final product was really quite spectacular.

(Let's not tell her that a real cottage/shepherd's pie is only to be made with mutton and that there's not a drop of bar-be-que sauce anywhere in it, shall we? She was so darn proud of herself for not wasting all of the leftover crap that she used to assemble this thing that I can't bear the thought of humiliating her so.)

We watched quite a few movies this weekend, and I'm not sure which was my favorite. On the lighter side of things was Valentine's Day with a lovely ensemble cast that included Bradley Cooper. On Saturday evening we watched A Single Man with Colin Firth, and both Mo-ther and I commented that we felt like our hearts would just break with the sadness of it. Last night we watched Mildred Pierce with Ms. Joan Crawford Her Very Self. This last one was my selection, since I am very anxious to see the HBO miniseries with Ms. Kate Winslet. Mo-ther felt that the themes were a bit mature for me, but after slipping a little more wine into her cup she seemed to be just fine with me watching whatever I wanted.

Today we're lounging in the sun and planning the week ahead. I'd love to tell you that there will be some substantive progress made toward that big fat list of stuff to do, but I've come to understand that there's no use getting excited about anything other than food, stitching, or my Aunt Chrissy around here. The old lady just doesn't seem to have very broad horizons...know what I mean?

I hope that you had a wonderful weekend and that you're having a lovely start to the new week. Please know that I remain your devoted and loving pal.

With much love, Stewey
Posted by Coni