AND THEN THE WHEELS CAME OFF THE BUS

You know the scene in The Birdcage when Nathan Lane walks into the bedroom wearing a man's suit? And when he crosses his legs, it turns out he has pink socks on? And he looks at Val and Armand and says..."Too much?"

That's what I wondered at about 2am when I pulled the stitchy glasses off my face, took a deep breath, and stood back and looked at Frank.

I'm not too sure about the Kreinik squiggles, but for now they're staying right where they are. Getting those suckers on that canvas took me all the way through BOTH Barbara Walters specials and an episode of the Real Housewives of Beverly Hills. (My God, do you want to just SMACK Camille Grammer, or what?)

The one thing I DO like is the furry effect that I managed to get on the cuffs. This was accomplished by using Rainbow Gallery's Whisper and then brushing it all vigorously with a brush. I think that his hat band and coat bottom should be furry as well, n'est pai?

Believe it or not, the moustache is the thing that's giving me the biggest fits, and it's the thing that I thought would be the easiest. I tried about four different kinds of fuzzy threads for it last night but didn't like any of them. And if you've ever tried frogging fuzzy threads then you know that I'm not at all interested in doing THAT again. So I'm thinking that I'll stitch the outlines with the grey velvet and then a thinner thread for the squiggles and then fill in the moustache with a random long/short kind of thing with the same Watercolours that I used for the beard. 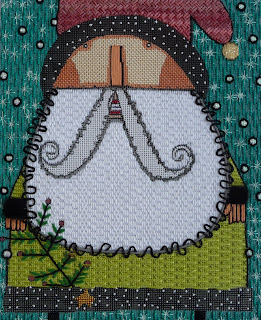 Here's a close-up of his hand on the right. I guess it doesn't look too bad when you consider it up close and all personal like: 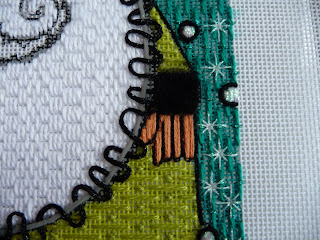 Have I lost you yet? I would imagine that there's nothing more boring than being inside my head as I try to figger my way out of the corners of this canvas. I'm sorry to be blathering on and on about this, but it's my very first time at the rodeo and I'm trying to map out my thought process so that I'll have something to refer back to when I pick up the next painted canvas.

I looked back at my little stitchy journals the other day and realized that I seem to get myself in canvas moods in the winter and linen moods in the summer. I wonder if it's the feel of something heavier in my hand when it's cold outside? Or if it's just that I seem to have more Christmas stuff on canvas than I do on linen. Hmmmm. A question for the ages.

I'm happy to report that I baked off about four dozen of the Greek cookies last night after dinner. I didn't even make a dent in the Big Pile 'O Dough, so methinks I'll end up with about twelve or thirteen dozen. These cookies are indeed called "koulourakia" (good eye, Ms. Stitch Bitch), and I thought I'd share our dear departed mother's recipe for them. (I'm doing this so that you will understand that Sig had a wicked sense of humor and was ridiculously smart in addition to being very very ornery. I could hear her laughing at me all day yesterday as I read this darn recipe and then looked at her picture on the kitchen counter and said "????!!!!!!!" over and over again.) I finally went to the internets to see if I couldn't get a better clue and found a recipe that had actual real live instructions, so I'll share that with you at the bottom of Mom's recipe. 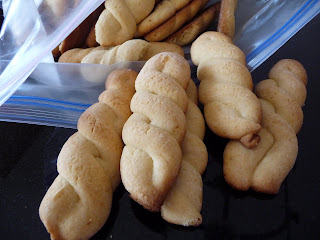 Get dough so it isn't sticky. Refrigerate several hours or overnight. Roll like pencils - twist - cut off- bake.

Do you see how I might have been a little confused? So after rummaging through the recipe tin further, I found some additional instructions in Mom's handwriting, but since there wasn't any ingredient list or name at the top I had to assume it was for these cookies:

Beat butter in mixer until it's light and fluffy.
In a separate bowl, beat egg yolks and sugar together.
Fold this into the whipped butter.
Stir 1 tsp. baking soda into the orange juice - it will foam up- pour into the mixer and put other flavoring in.
Mix well.
Sift 5 tsp. baking powder into about 2 cups of the Swans Down flour - put in mixer - gradually add rest of flour and keep mixing until mixed well.
Make pencil thin when rolling out as they puff up. Should be a golden light brown when baked.

Here's where I should probably tell you that we did, in fact, have these cookies every year at Christmas and Easter time, and they were wonderful. They taste of almost nothing, but when you dunk them into your morning coffee, all seems to be right with the world. My confusion comes when I try to figure out just how the heck anybody ever managed to make these damn things with these silly recipes!

So, to spare you all of the angst and hair pulling that has been going on over here in Hoosierville, may present a real live recipe from ask.com that was written by Lynn Livanos Athan:

Preheat the over to 350 degrees.

Using the mixer, beat the butter and sugar until light and fluffy. Add the vanilla extract and ouzo and mix well. While the mixer is running, add eggs one by one and mix until well incorporated.

In a separate bowl, sift the flour with the baking powder and soda. Add the flour mixture to the butter mixture little by little. The dough will be soft and malleable, but it should not be sticky. You should be able to pinch off a ball of dough and roll it into a cord or thin tube.

If the dough is too sticky, add a little bit more flour. Allow the dough to rest a bit before rolling into shapes.

Beat the remaining two eggs in a bowl and add a splash of water to the egg. Brush the cookies lightly with the egg wash and sprinkle with sesame seeds if desired.

Bake cookies on parchment paper or a lightly greased cookie sheet for approximately 20 minutes or until they are nicely golden brown.