Hello, my dear stitchy bloggy friends! (Who would ever have imagined that lil 'ol me....a nine-pound bundle of joy dressed up as a Jack Russell terrier would be able to call stitchers friends?!)

What the hell did they expect from me? That I was going to put the little $*#&% in a baby carriage and parade it around the neighborhood? For cryin' out loud...I act like an actual dog once every four years and my stupid mo-ther and aunt pee themselves with laughter. Sheesh.

Anywhoose, my Zhu Zhu has been on "hiatus" for a few days, but I am determined to figure out where the little $*#&% is hiding and have another go. I've already written a letter of complaint to the manufacturer that the "Specialty Play Dome" needs some SERIOUS work and that it needs to be a bit more challenging to break into, but I haven't heard anything back from them yet. I've also volunteered to be a product tester for any/all items that they decide to release in the future. We'll see how that goes and whether or not it is a conflict of interest with the other gigs I've got going around here. (My attorney is looking into it for me.)

Mom has been spending almost all of her time with that damn Kindle. She's even gone so far as to name it. Ellison. What the hell kind of a name is THAT? She claims that it's because the screen had a picture of Ralph Ellison on it when Aunt Chrissy gave it to her, but I think she named it that just to annoy me. All I know is that if I hear "Oh, Ellison, you're the very best think that ever happened to me" one more time I'm going to throw up.

I know that mo-ther wants you to think that ELLISON was the best present that she received, but there are two others that she has been fixated on. The first one she told you about...the book from Ina. It figures that my gd'd cousin comes up with a great gift the year I decided not to do any shopping of my own! Mom keeps looking at me saying "Stewey, Ina Garten knows my name!". Then she breaks out into the ugly snot cry and has to go lay down for an hour. If I wasn't such a big fan of Ms. Garten myself, I'd drag that damn thing out to the patio and bury it in the snow. 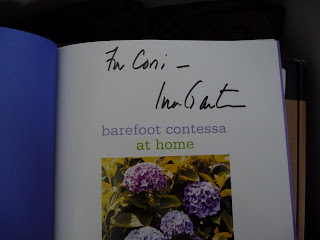 The other gift that has my stupid mo-ther in complete hysterics every ten minutes is a canvas that Aunt Chrissy gave her. Ever since I've been here there has been a needlepoint picture of a girl reading a book hanging in the bedroom. When I asked Mom about it, she told me that her Mommie made it for her and that it is her most prized possession. I assume that she means "most prized possession AFTER you, my Stewey Darling", but I don't want to push my luck in light of the PeePalooza that I had over the weekend. 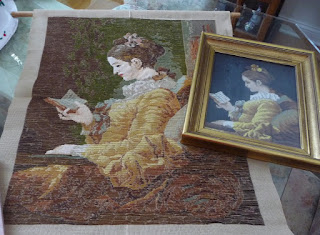 Apparently, a lovely lady had purchased this piece and had started it, but realized that she would never finish it. So she took it to the LNS to see if anybody wanted to purchase it. Aunt Chrissy did, and I don't think Mom has stopped looking at it since. I think it's called something like trame', and it's done on Penelope canvas. From what I can tell, Mom will need to buy wool thread to use on this one, and she'll have to do all tent/continental stitches on it to fill in the guidelines. Considering the size of it, methinks she'll be at this one for quite a while, but I heard her say that she wants to put this on her Stitchy List That Will Not Become A Major Source of Angst and Guilt No Matter How Far We Stray From It for 2010.

In other stitchy news, Mom has decided to participate in the Prairie Schooler Alphabet Stitch-A-Long over at Ms. Vonna's:http://psabcbee.blogspot.com/ 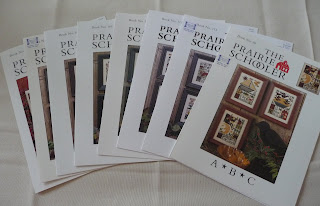 I'll be interested to see how she pulls this one off, especially since she's already stressing out about the thread conversion. She keeps waffling back and forth as to whether or not to do it in the DMC colors or whether or not she should convert to overdyed. Stay tuned.

Well, it's time for some serious napping. I have a new holiday blanket that I'm really enjoying, so I don't want to spend too much time away from it. 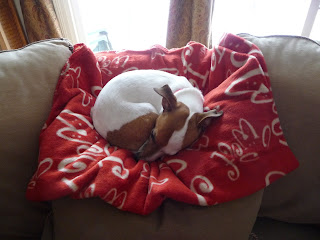 I hope that you had a wonderful Christmas and that you'll stick with me through the New Year. I know that I come off like I'm a self-assured little guy and that I rule the world, but sometimes it's just nice to be sure of you.