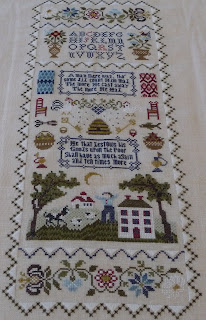 The Riddle
The Drawn Thread
32ct. Barn Owl linen
Needlepoint and Gloriana silk
It's finished! Fee-nee-toe. Ka-poot. Zee End. Despite my very best efforts to actually put the last stitch to linen before the stroke of midnight on November 1st, I just didn't quite make it. Aunt Chrissy was here to cheer me on, and we even took advantage of the time change to grab that extra hour, but I made a ridiculous mistake on the final flower and had to frog. The judges deducted points for delay of game, but I was able to try again yesterday and I didn't move until the very last piece of silk was crossed, anchored, and snipped. Woo Hoo for me! In looking back over all of my stitching, I do believe that this is the largest piece I've ever attempted. Whew.

After the big finish, I went upstairs to play a bit and managed to re-stock my basket full of WHATEVER THE H-E-DOUBLE TOOTHPICKS I FELT LIKE! What a refreshing change of pace! I forgot how lovely guilt free stitchy indulgence can be...me likey!

My first choice was Laura J. Perin's Idaho Star from her American Quilt Series. I think I mentioned it before...I'm stitching this one with Vineyard Silks. During the colorization process last night I realized that I needed a few extra colors, so I found some Silk and Ivory and a Mandarin Floss to add to the mix. I think it's going to be tres' cool beens when finished: 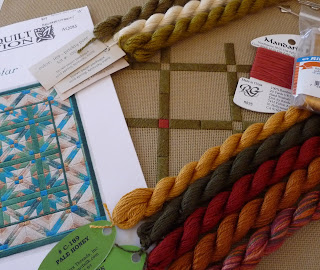 Then, just because I liked the feeling of completing a WIP I added Lilly Frog: 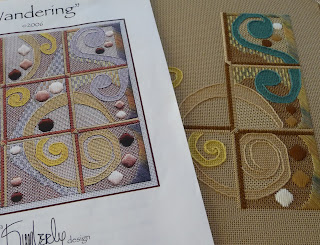 And The Big Zipper/Live, Laugh, Love: 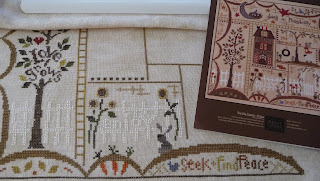 Then I rummaged around in my Autumn basket and found some new pieces to start! First is a piece that I didn't even realize I had, Moonlit Garden by Blackbird Designs. I had a crappy linen pulled for it, so I switched it out and decided to use Days Gone By linen from Silkweaver: 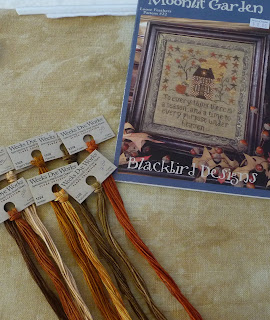 Frederika is a piece that I've admired on several blogs, so I decided to give it a try. I have a piece of 40ct. Pearled Barley linen for this one, and since I've never worked with 40ct. before, I promise to give it my best college try before giving up in disgust and switching it out to a 32ct: 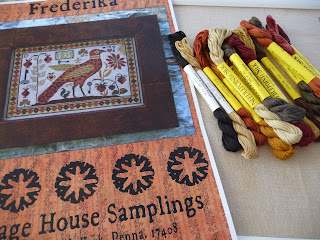 And finally we have The Drawn Thread's Autumn Arbor. I wish I knew what the heck the linen is for this one, because it's got some lovely buttery tones that I think will look real swell with the silks: 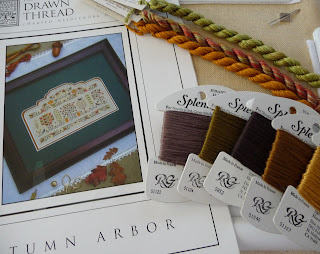 Stewey had a rather quiet Halloween, but we did manage to get a rousing game of PUMPKIN played before Mommie Dearest here got a little too chilly for comfort. I'm not sure of the rules of the game just yet, but all I know is that this is the first time in four years that my dog has actually acted like a dog (a not a fussy little gentleman who doesn't think he's a dog), so I'm not complaining one bit. Damn dog. 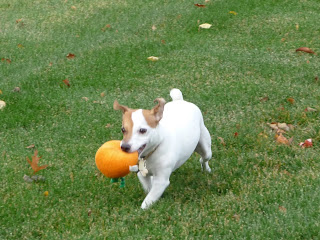 "I wonder how long I have to continue with this ridiculous charade before the old lady will figure out that I really AM a fussy little gentleman who isn't really a dog? I want to put on my silk smoking jacket and get back to my movie. Damn Mommie."