PLAYING ALONG WITH MS. VAN SCHURMAN

I'm an avid fan of Anna Van Schurman's "Stitch Bitch" blog, so it is with great happiness that I participate in the recent MEME that she posted...WHAT'S IN YOUR BAG? If you'd like to see what a NORMAL person keeps in her stitching bag, please go to:
http://stitchbitch.blogspot.com/.

If, however, you'd like to see what a NUTBALL case like me keeps in her stitching bag/basket, then please peruse at your own risk. I should point out that I don't have a stitchy bag because I'm a big fat LOO-ZER and very rarely go anywhere to stitch in polite company, so all of my crap sits in a big basket at the side of my Happy Chair.

(If and when I do get invited to go places, though, I always find a suitable device to transport all of the crap from the basket and I almost always wear a bra.)

Also, if you would, please keep in mind that I am a weird-o of the first order when it comes to containerizing and organizing and such, so if it looks like I have enough stuff to survive the Apocalypse, then you're probably correct and I should see about getting on better meds: 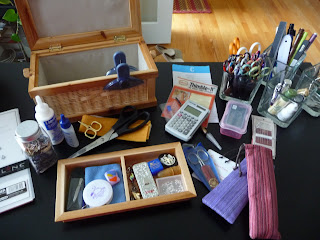 Let's see what we have here, shall we? On the far left is a project notebook in which I carefully document each project on its own page. I list the title, designer, size, threads, and any other relevant details that I'm sure I'll need one day in the future, even though most of my projects end up stuck in a FUPPY box with all of their original parts so that nobody will ever need to wonder what went with what. (Yes, my project notebook was a shameless attempt to play Varsity, and although I pretend like I actually know as much as she does, I'm sure Aunt Chrissy's notebook is far superior to mine. In every way.)

Next comes the ort jar (do I really need to talk about it?), along with some Liquid Stitch and Fray Check. Small scissors, large scissors, and some felt pieces for anchoring q-snaps come next, followed by the top part of the lovely little stitchy box that sits inside the basket that holds all of my stitchy crap. Here we have: tiny tweezers, a tape measure, an eyeglass lens cloth, a magnet from my SBFF Laura J. Perin, a tiny little thingie to pull thread through canvas, a Shepard's Bush pin, magnetic thread straighteners, a scissor fob, some Thread Heaven, a Blistex box with other tiny little stitchy tools, two rubber thimbles, a small box of straight pins, and a magnet with my initial on it from Kelmscott.

In the bottom of the box are: a list of all of the Gingher designer scissors ever made, Thimble-it's, an eyeglass repair kit, a boo boo stick, calculator, Stitchy Friend, Dovo scissors, and two pouches with magnifier/cheaters (one is 1.5 mag and one is 2.0 mag for when I'm feeling particularly cocky and decide to stitch over one on 38-count linen). I also have lots and lots of needles, some in their original manufacturer's cards, and some in a pink container that holds yet another set of containers that separates the needles by size. (Told you I was crazy.)

Oh, it looks like I forgot the chip clip that I snagged from Aunt Chrissy's house. It's blue and has a magnet on the front of it, which makes it positively perfect for clipping a chart to the q-snap so that I can have it right in front of my face as I stitch.

See? All nice and tidy. You'd never know that this thing actually holds a McGiver Stitchy Kit of the First Magnitude now, would you?

Stewey gets peeved at me and will sometimes hide stuff in his fort just to aggravate me, but ever since I installed the flat screen for him under the bed, he seems content to just watch HGTV and be done with it. Every now and then I catch him THINKING about using one of my Ginghers on an arts and crafts project for school, but once I patiently remind him that they actually cost more than he did, he usually backs down. (Yup. He was fifty bucks. He was on sale because of his overbite.)

(Oooopps. Sorry. I'm supposed to refer to it as his "special feature" so as not to damage his self esteem.)

So, rephrasing: Stewey was very affordable because of a special feature that made him quite unique among his litter mates and I'm thrilled that I was able to bring him into our home. Damn dog.

Play along with the meme, won't you? WHAT'S IN YOUR BAG?