EVEN THE CLOUDS ARE CRYING TODAY

My Uncle Connie was a good man. He was tall and handsome and he was very very funny. He lived with and took care of Grandma until she passed away, and then he married the love of his life, Aunt Linda. He was a father and a husband, a grandfather, a brother, a son, an uncle, and a friend. He worked hard for Ford until retirement, and he planted a huge garden every year. When we were little, he took all of us kids to Cedar Point and King's Island, and we had baloney sandwiches and red pop for lunch. He always had gum.

One summer, he and Aunt Linda came to Phoenix for a visit, and I don't think we did anything but laugh and eat the whole time they were there. It was the last bit of time that Mom was able to spend with her little brother, and I think that those days were the happiest for her during all of that chemo.

A lot of people in Lima knew him as Mike, because his full name was Constantine Michael. For me, though, he was always Uncle Connie. The last time Chrissy and I visited him, we were talking about the family, and he said "My mom and pop had all these kids with names like Mary and John, and Don, and JoAnn, and then I came along and they named me Constantine. Go figure."

I am left handed because of my Uncle Connie. We were at Grandma's...coloring in our coloring books, and he said "Connie Jo, you're using the wrong hand!". Of course, he was teasing me, but I immediately switched that crayon over to my left hand and it stayed there from that moment on. (I was Connie Jo then, instead of "Coni", and I never got over feeling bad that I changed the spelling of it whenever I wrote to him.)

When Stewey came along, my Uncle Connie would call me weekly to see how he was doing. I think the name cracked him up, since he always had a little laugh whenever he said it. He would send me every cute email about pets and their silliness, and I told Stewey that one of these days we were going to go over to Lima so that Uncle Connie could get a good look at him.

Uncle Connie passed away on Monday evening after a hard hard fight with cancer. The last time I talked to him, I told him he couldn't go anywhere until he got me down an aisle, and that even though I'm a 43 year old spinster I still had hope, and he said "I'm gonna' lick it, Connie Jo. So don't you worry."

Chrissy and I will go to the services over in Lima on Friday, and then I'll come home and try to figure out how to live up to his legacy. In the meantime, if y'all would say a little prayer for my Aunt Linda, Tiffany, Lori, and Lenny, all the grandkids, my Aunt Mary and my Aunt JoAnn, that would be great. 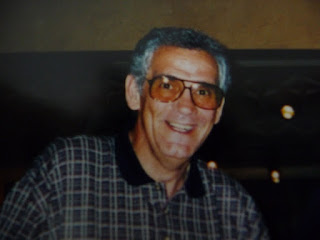