Three cheers for Jane from The Chilly Hollow Needlepoint Adventure! In her comment yesterday, she suggested that I try doing a tent stitch over every other thread for the background on Tall Poppies. Woo Hoo! 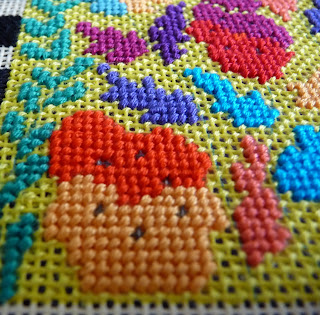 Like a good little stitcher, I sat my heiney in the Happy Chair and just GOT TO IT. At first I wondered if I would be able to figure out how to do a tent stitch over every other thread (I know, I know), but once I got into the rhythm of it, things just moved right along! 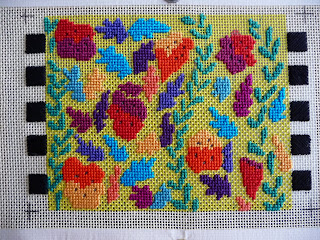 I got about 3/4 of the way to the top and then got a little bug-eyed, so I played with the black squares a little bit for a change of pace. If I stick with this one again today I could....wait for it....gasp with delight....jump up and down with glee.....FINISH THIS ONE!

I find it fascinating that I can go months and months without finishing anything, and then POOF! I get one thing done and get on a roll. I suppose that it's all part of my "all or none" personality, but it seems that if I'm not in a stitchy rut, then I'm flying through WIP's with the greatest of ease.

I had a friend named Dr. Dan who once told me that he had never met a person who had absolutely no grey area. It was either A or B with me...nothing in between. We had a good laugh over it that, and I asked him if I had to be a roller coaster, could I be one of the twisty/curvy ones that made people throw up?

My friend Dr. Dan and I first met on the school bus when we were in sixth grade. He was the tallest kid in the class and was the star basketball player. His family moved away to Mansfield, Ohio once we entered high school and I lost touch with him. After I had been at Notre Dame for a few weeks, a Lima friend of mine said "There's a really cool guy in my dorm that I want you to meet. His name is Danny Guagenti and he's originally from Lima." (Please note that my friend Dr. Dan's last name was not Guagenti....it was Gaughan.) So in walks this little guy (about 5'3" tall) and he introduces himself with a little twinkle in his eyes. It took me about a half hour, but eventually I smacked myself on the forehead and said "OMG! You're not Danny Guagenti! You're Dan Gaughan! What the hell happened to you?! You used to be tall!"

Now you would think that this comment would have ended the friendship right there. But nope...without missing a beat, Dan looked me deeply in the eyes and said "Uh, Con? You all were four feet tall in sixth grade. Everybody looked tall to you."

So our friendship continued through the years and we followed each other from place to place. Dan graduated from Notre Dame and then attended Wright State Medical School on a U.S. Navy scholarship. Once he finished med school, he then served in the Navy as a Naval Flight Surgeon. (I like to tell everybody that Top Gun pilots all have their own physicians, and that those physicians have to be trained as Top Gun pilots too...so that's what my friend Dr. Dan was, but I'm sure I screwed that all up and only remember it that way because Dan looked exactly like Tom Cruise in his flight suit.)

I moved to Atlantic City in May of 1993 and within three days of getting there, Dan called to tell me that his ship was going to be in New York for Fleet Week and that I had to come for a visit. (He was on the USS America). Did I mention that I was still traumatized by the drive from Indiana to New Jersey? Did I mention that I was afraid to leave my crappy little apartment for the first month that I lived there because New Jersey was the biggest and loudest place I had ever been?

God only knows how the hell I did it, but Memorial Day 1993 found me in my little Pontiac Sunbird on the Garden State Parkway headed to NEW YORK CITY. NEW YORK CITY. ON MEMORIAL DAY WEEKEND. (Man, you talk about your country bumpkin...). Well, I made it and Dan and I spent the entire day hanging out. We toured his ship (which was bigger than Lima, Ohio by the way), we took a subway to SoHo, and we ate new York pizza. It was the first time that I EVER did anything that adventurous, and when I made it back home to tell people about it, they were amazed that ANYBODY could get me out of my apartment, let alone out of New Jersey.

Anywhoose...after finishing his time in the Navy, Dan started his residency in Toledo, Ohio and got married. Six months later, he suffered a massive heart attack while driving himself to the ER and died. He was thirty one years old.

There's not a day that goes by that I don't think of my friend Dr. Dan, and sometimes I wonder what the hell he would think about me writing this silly blog. He sent me an article once about writing children's books, but I never thought a thing of it. Now, I wonder if he was trying to tell me something that would have changed the course of my life.

Man o' manachevitz. I have NO IDEA where all of that came from! One minute I'm talking about putting tent stitches on a piece of needlepoint and then BAM! I'm reminiscing about a lost friend. STEWEY, GET THE MIDOL!

(I guess that A and B thing wasn't too far off after all.)

Happy Weekend, everybody!
Posted by Coni