I did a little re-thinking of Ye 'Ole Christmas Basket and came up with some additional projects. I put them on the dining room table to give them a good review, but I was more impressed with my merchandising skills than anything else, so we called it a day and I went back to the Happy Chair armed with the same 'Ole, same 'Ole. 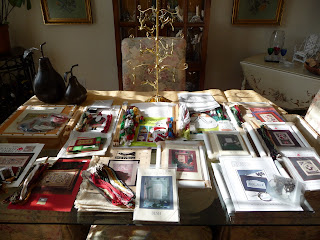 (In case you're wondering about the pears.....I happen to collect pears and have done so loooong before they were chic. I blame it on the JC Penney Home Store. I was on the phone with my friend Cheryl one night and a commercial came on in which a man was sitting on a couch, and in the background was a painting of a pear. So I put my shoes on and went to the JC Penny Home Store and bought the painting. It spoke to me in a "Gee, this looks just like my big fat butt" sort of way, and I then began my quest to accessorize it accordingly.) 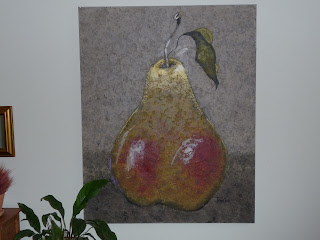 My pear normally hangs over the fireplace, but sometimes I like to mix it up a bit and hang it in my bedroom.

OK, enough of the Better Homes and Gardens tour.

I started Prairie Schooler's "Twelve Days of Christmas" and made a fair amount of progress while watching more of "The Sopranos". I'm in the middle of season five, which is not my favorite, since Tony and Carmella are separated and that makes me very sad indeed.

But I was smart enough to outline the boxes on the left side of the piece first and then do a little bit of filling-in so that I don't get too bored too fast. 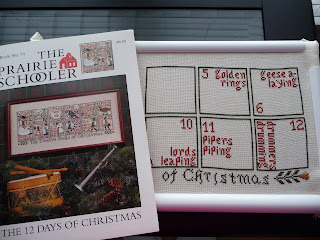 I'm hoping that this will be completed before Christmas, but I have resigned myself to the fact that it will not be framed and hung until next year. Sigh.

Stewey is coming around slowly, and even spent some time last night in the Happy Chair with me. He likes to get cozy on his toasting blanket (so called because that's where he toasts himself in front of the fire), and when he gets too toasted, he moves back to the Happy Chair for a little cooling off. I swear I smelled scorched whiskers last night, so I suppose I had better keep a better eye on him. Anywhoose, we had a long talk and he apologized for throwing such a fit this year. Methinks it has something to do with the "You better watch out, you better not cry" thing, but I'll take anything I can get to have peace in the kingdom at this point.

I'm off to the Target pharmacy and then out for provisions. We did get a nice amount of snow this weekend and are expected to get a little more, so I feel compelled to stock the fridge, freezer, and pantry for the duration. God knows I don't need a thing, but I always want to be prepared in the event that the 9th Fleet decides to drop in for snacks.
Posted by Coni